The LAUSD’s first responsibility should always be to protect the safety of the students that they serve, especially when these children are in their care. Unfortunately, the Miramonte sex abuse scandal, the failure to remove drinking fountains and pipes containing lead from our schools,  and the fact that special education students are sent to a school where there are allegations of physical abuse are examples where the district has failed at this task. However, administrators in the district have become adept at using the public’s concern to remove staffers from the classroom for reasons that do not appear to have anything to do with student safety. In the case of Nobel Charter Middle School, it appears the Principal, Derek Horowitz, is using this same method against a parent to silence her complaints. 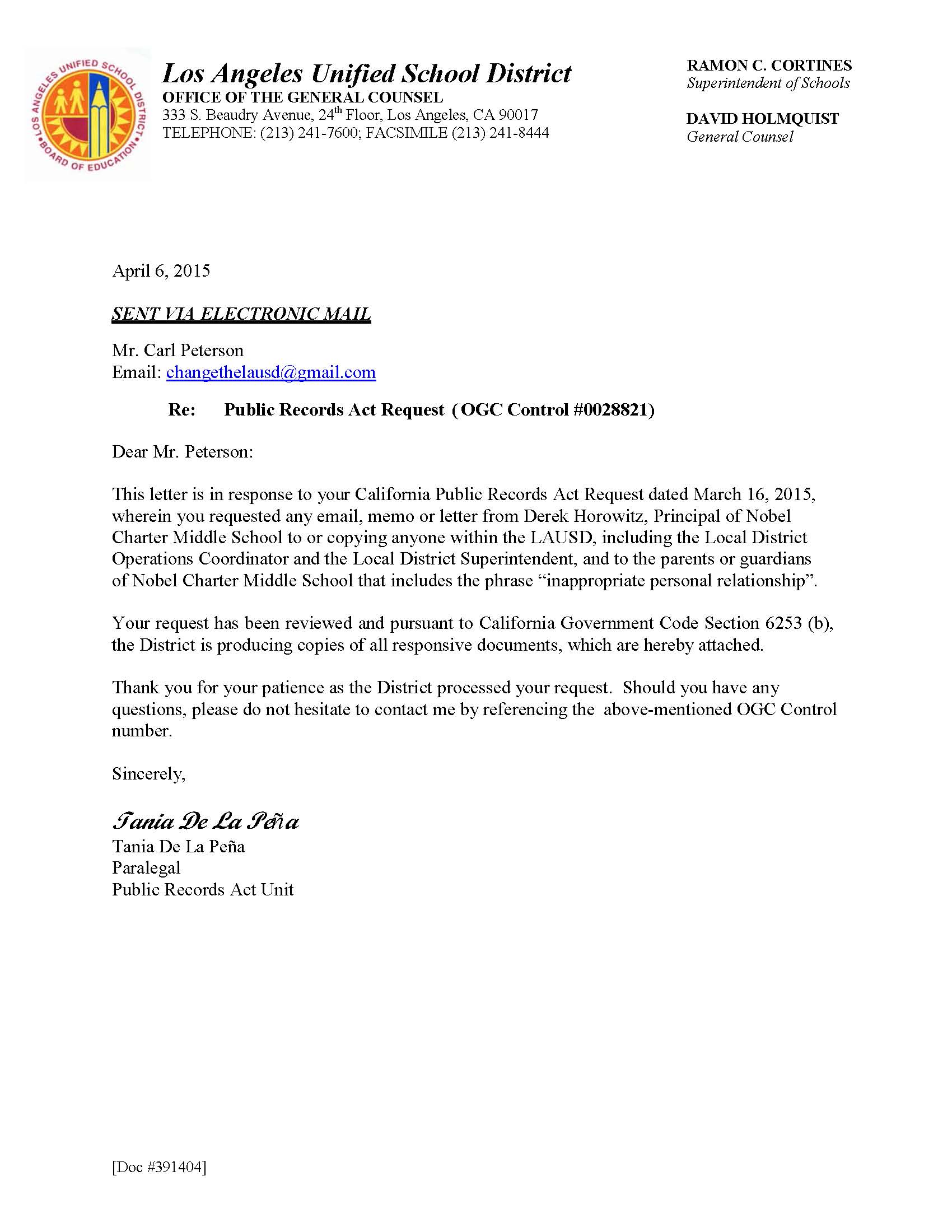 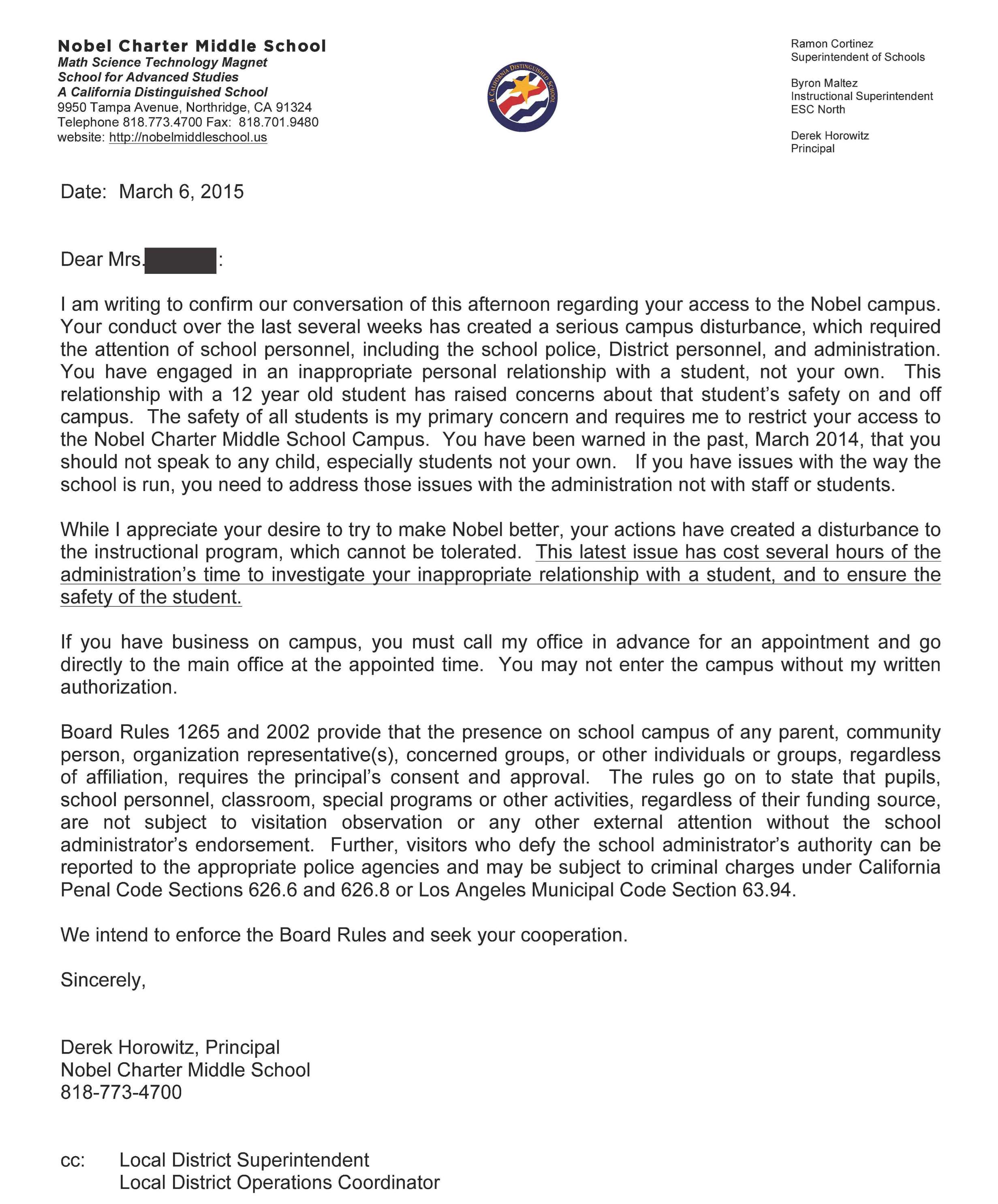 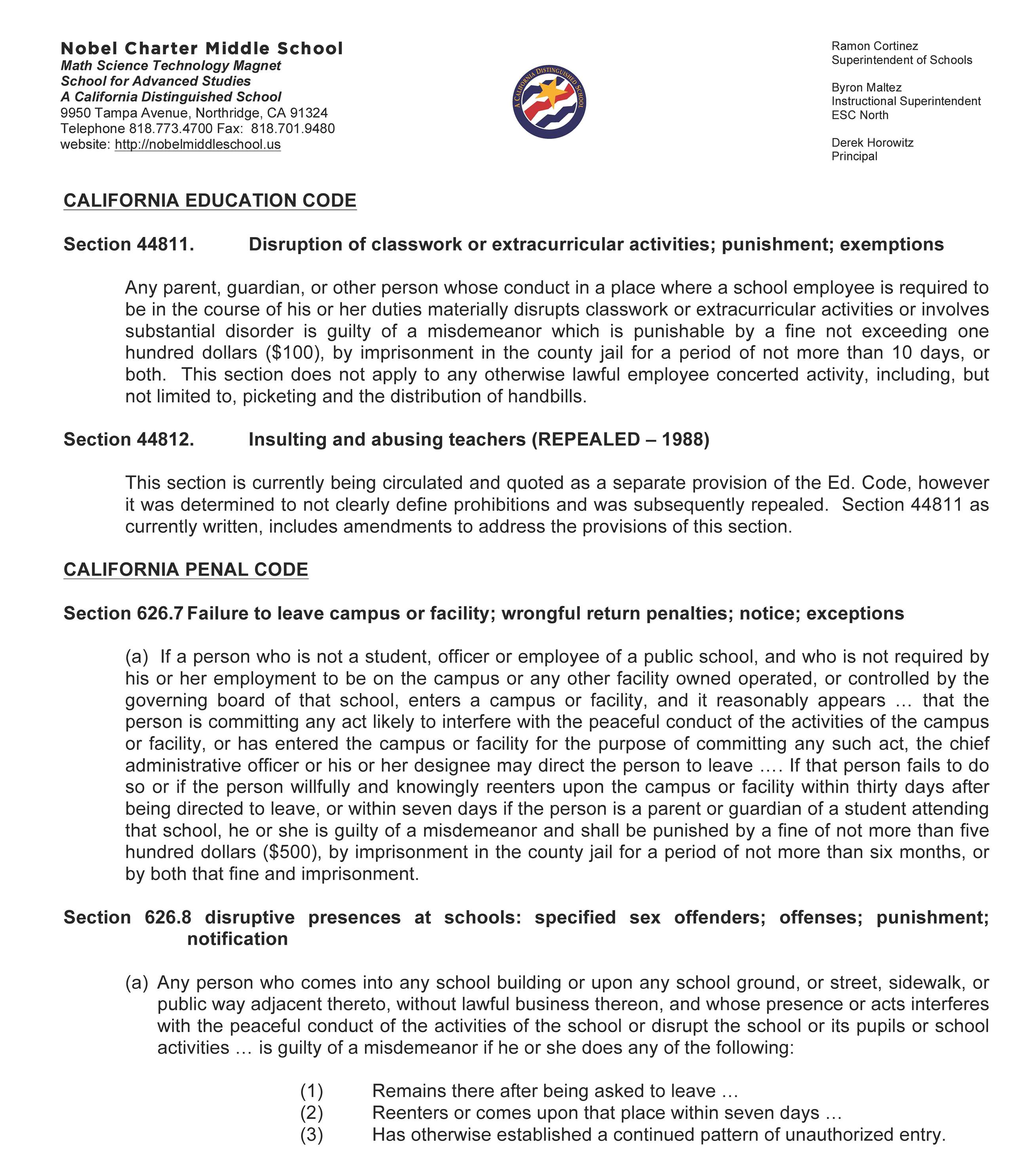 The school administration had already identified the parent in question as being “disgruntled.” In a previous post I had referenced a letter she provided to me that prohibited her from speaking to the “staff or students” of the school. To get additional information about this situation, I sent a California Public Records Act request on March 16, 2015. Despite the fact that this law specifies that the district needed to respond to this request within 10 days, they did not send a response until last Friday, and it only contained the letter that I had already seen. While this letter contained serious allegations regarding the “safety of the student,” it was the only “email, memo or letter from Derek Horowitz, Principal of Nobel Charter Middle School to or copying anyone within the LAUSD, including the Local District Operations Coordinator and the Local District Superintendent, and to the parents or guardians of Nobel Charter Middle School that includes the phrase ‘inappropriate personal relationship.’”

While the letter does not specify the specifics of the “inappropriate” relationship, the parent was able to give me some details of the events that led to her warning. She confirms that she was in contact with a student in the school who was denied access to the schools charter council meetings. His parents signed a consent form so that he might attend these meetings, yet Mr. Horowitz allegedly told him that this was not enough. Since these are public meetings they should be open to any member of the community, including students at the school, the parent was advising him  what he should do to gain access. This hardly seems like something that jeopardized the “safety of the student” or would create “a disturbance to the instructional program.”

It is possible that in the “several hours of the administration’s time” that was spent investigating this issue, they did find something that they did not document in this letter. However, it seems likely that such a finding would have been shared within the LAUSD and nothing of this nature was included in the response to my request for documents. It is even more suspicious that the child’s parents were not warned in writing of an “inappropriate relationship.” In fact, if these allegations were true, then the parents of all students should have been warned of the existence of a possible predator. This either did not happen or the existence of the documents was not confirmed in the response that I received from the district.

The parent has tried on multiple occasions to contact district personnel in an attempt to resolve the situation, but has not received a response. This is unacceptable since is clear that intervention by the district is needed. A clear determination must be made whether there was, in fact, an “inappropriate relationship.” If, as I suspect, there was not, the district must investigate whether the allegation was made in an attempt to intimidate the parent. If an “inappropriate relationship” did occur, the district must determine why the other parents were not given an appropriate warning. Regardless, it seems that the performance of this school’s Principal needs to be evaluated by the LAUSD.