An Administration Built on Blackwhite 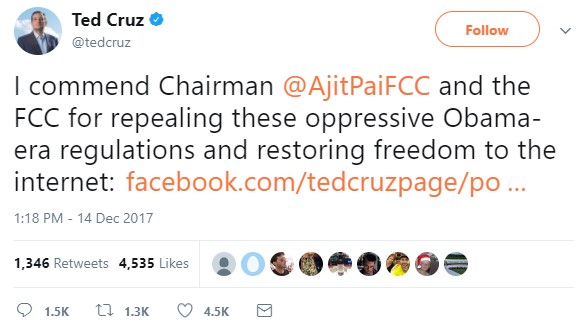 The Right-wing has spent a good portion of this year complaining that their First Amendment rights are under attack. Considering the vast amount of speech that now occurs on the Internet, it would seem that they would, therefore, place a priority on protecting Net Neutrality rules that ensure a level playing field for all content providers on the web. Unfortunately, this is the era of Trump and protections that “prevent Internet access providers from blocking content, websites and applications, slowing or speeding up services or classes of service, and charging online services for access or fast lanes to Internet access providers’ customers” are now labeled as “oppressive”. Welcome to the corporatocracy where “restoring freedom to the internet” requires you to allow your Internet access provider to decide what information you are allowed to receive.

Included among the “Snowflakes” who opposed the FCC’s dismantling of these consumer protections based on “believing online propaganda” were “more than 20 internet founders and industry leaders wrote an open letter warning [that FCC Chairman] Ajit Pai's plan to kill net neutrality poses ‘imminent threat’ to the web”. These “pioneers and technologists who created and now operate the Internet” noted that action taken by the FCC was “based on a flawed and factually inaccurate understanding of Internet technology” and “dismantles 15 years of targeted oversight from both Republican and Democratic FCC chairs, who understood the threats that Internet access providers could pose to open markets on the Internet.” How exactly is this a repeal a restoration of the “status quo”?

While Ted Cruz and his $322,505 in telecom campaign contributions feel that “the Internet grew up wonderfully free from govt regulation”, reality tells a radically different story. First, the government helped birth the Internet as its grants were directly responsible for the TCP/IP protocol which is "the Internet's backbone." More importantly, Net Neutrality was created in response to the actions of Internet Service Providers. “The Associated Press in 2007 found Comcast was blocking some file-sharing services. AT&T blocked Skype and other internet calling services — which competed with its voice-call business — from the iPhone until 2009.” It was reported in 2013 that Pai’s former employer, “Verizon Wireless, AT&T, and T-Mobile USA block [Google] Wallet on their phones” because they were “supporting ISIS, the wireless payment standard for mobile devices”. Under our newfound freedoms, they are once again free to engage in such actions. Life is so much easier when corporations get to bypass the market and decide what will be the standard.