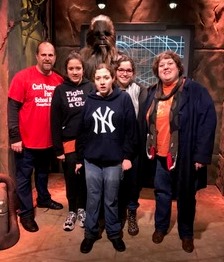 Since the IEP teams were not empowered to make the changes our daughters needed, we were forced to hire a lawyer to file cases against the District. The bureaucrat assigned to our case seemed to genuinely care about the children, but we did not feel assured that he saw our daughters as individuals with unique needs. To help combat this for our second case, we brought our daughter to the session so that he was forced to see her as a child instead of a data point.

The next realization was that the bureaucrat that we were dealing with was just one cog in a complex mechanism. Like the IEP team, he was forced to match parameters set by the District, even when he agreed that they did not serve our daughters. When pushed to move outside the box, he would retreat to another room to ask permission from another bureaucrat who never revealed himself to us.

Feeling frustrated towards the end of this two-day process, I turned to my wife and said that “someone has to change this process.” Together we decided that I would be that person and run for the School Board.

While special education is the subject that set me on this path, it has proven to be a symptom of much greater problems within the District. The LAUSD has become the home to the greatest number of charter schools in the country, in part because parents feel that the LAUSD schools do not give them enough opportunity for engagement. In order to stop this loss of students and prevent bankruptcy, the District needs to empower parents and teachers at the school level so that public schools become the better choice.

As a whole, charter schools serve a lower percentage of students with special education needs than their District counterparts. This is indicative of a system that has allowed charters to operate without proper oversight. Public schools are not allowed to cherry pick those with special educational needs, English learners and those with behavioral problems. Charters receive public funds and should also serve these students, but the District does not hold these private organizations accountable to follow the rules.

The concept of an “individualized education” should be expanded so that it includes all students. An inclusive system would recognize that there are students who, like my daughters, will never attend college. Therefore, vocational training along with expanded art and music offerings must be available to all students. This provides not only a well-rounded education but a system that prepares all students for lifelong learning and success beyond the classroom.