It Is Not Enough to Claim Inclusion 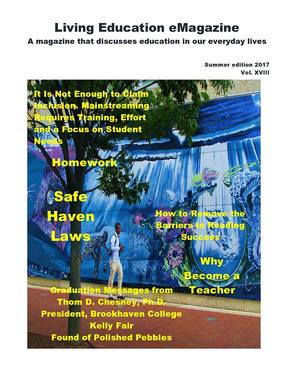 Mainstreaming of students with special education needs requires training, effort and a focus on student need.

My wife sat heartbroken as she watched my daughter’s classmates shunned her as she tried to interact with them. Despite the fact that most children on the autism spectrum have difficulties establishing social interactions, the Los Angeles Unified School District (LAUSD) had decided that the chaos of lunch period was an appropriate time to provide a “mainstreaming” opportunity. Without any professional assistance, she would leave the confines of her self-contained classroom to eat with children without disabilities in an effort to improve “academic achievement, self-esteem, and social skills.” She was making a valiant effort, but the other students also lacked training and could not get past her quirks. It was hard to see how this was doing anything but damaging her self-esteem.

The results did not get any better as my wife entered into a general education classroom to observe another effort at mainstreaming.  While in the special day classroom, my daughter had received focused attention to keep her on task in the curriculum. However,  in this general education classroom the teacher was responsible for teaching an entire class and did not have time for students who could not keep up. Therefore, the students with special needs were placed in the back of the room and given games to play with on their computers. Was just being in the same classroom as students without disabilities supposed to provide academic achievement? Segregated from the rest of the class, she certainly was not improving her social skills.

Unfortunately, pushing for individual results is easier than changing a bureaucratic system the size of the LAUSD. Therefore, while we were able to move our daughter into a different program for the next school year, the fatally flawed system remained in place, continuing to harm the students it was supposed to serve; it is an environment built on good intentions but not properly designed.

My daughter now attends John F. Kennedy High School in Granada Hills where, in the 2012-13 school year, 16% of the students had special education needs. Like her previous school, Kennedy also integrates my daughter and her classmates into general education environments, but in a more thoughtful manner. In her freshman year, tears were brought to our eyes as we watched her participate in her ROTC class inspection, with her typical peers gently encouraging her back into line when she became distracted. This year we watched with excitement as she participated in the school’s choir recital, concentrating intently and literally finding her voice.

There are several factors that allow this program to succeed while where the other failed. The first is a classroom teacher, Ms. Mary Jo Cormier, who is dedicated to making sure her students reach their full potential. This includes selecting elective subjects that will suit her students' interests and working with the general education teachers to ensure they are prepared to meet each student’s individual needs. For most of the day, my daughter is also helped by a behaviorist who can reinforce social cues that she may miss due to her disability and helps keep her on task. Most importantly, the school has an active peer buddy program that allows students in general education to interact with my daughter and her classmates in a supervised setting. They are, therefore, better able to understand the challenges their classmates face and learn how to have meaningful interactions with them. This culminated in the end of the year “buddy prom” where both sets of students celebrated their achievements.

While this program has been a good fit for my one daughter, it must be emphasized that Special Education derives its name from the fact that the needs of each student are unique. For some students, especially those who are physically fragile, a general education campus is not an appropriate placement. For this reason, the LAUSD developed Special Education Centers that were specially designed and operated to serve the most vulnerable students. Unfortunately, in an effort to reduce costs, the District has chosen to focus on the part of the Individuals with Disabilities Education Act (IDEA) that says “that children who receive special education should learn in the least restrictive environment” while ignoring the section that states to the “maximum extent that is appropriate.” Instead of using what Dr. Joy Efron, a retired principal of one of these centers, calls a “success experience”, children must now fail in a general education environment before being admitted into these centers.

“At Frances Blend School (which was one of several options for blind students), we concentrated on teaching braille, orientation and mobility, listening skills, a variety of access/adaptive skills and as soon as the student had sufficient skills to move on to a more ‘integrated’ or ‘mainstreamed’ setting, a decision would be made, involving the parents,” Dr. Efron explains. “Now, with that option eliminated, a student must FAIL before getting what that student needs.  We don't send a high school student to a graduate physics class at Caltech and make him/her fail before the student can enroll in a beginning high school physics class.”

If the focus was returned to the needs of the students instead of the needs of the District, these centers could be operated in a way that provides integration along with the required special services. For example, much like the peer buddy system at Kennedy, students who are interested in careers in special education and health care could be enrolled in magnet programs co-located at these schools. This would benefit both sets of students as those with special needs receive meaningful interaction with non-disabled peers and these students receive a jump start to a career. This helps all students reach their full potential. Isn’t that the purpose of a high-quality education system?