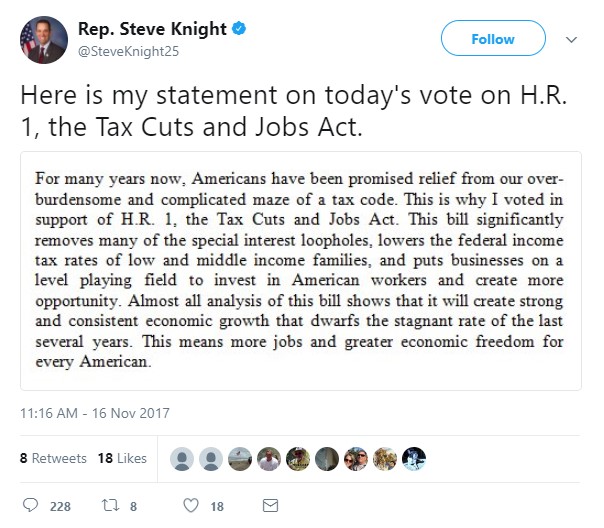 As multiple fires burned out of control throughout Southern California, including the Rye Fire in Santa Clarita, Congressman Steve Knight used his Twitter feed to provide his constituents with vital information. However, the help needed by the victims of these disasters cannot be delivered on social media, they will need their governments to provide them with an actual safety net. Unfortunately, the tax bill voted on by Knight last month eliminates one way that this assistance is already provided as it “would phase out the ability to deduct personal casualty losses from wildfires and earthquakes...but keep the deduction for damage from hurricanes and floods like those in Florida and Texas this year.” Knight’s “yes” vote helped to pass the bill.

The elimination of the ability to deduct losses from wildfires and earthquakes was not the only way the Republican tax bill would harm Californians. Unlike 39 other states who receive more from the federal government than they pay in taxes, California only “receives $0.99 in federal expenditures per dollar of taxes paid”. The bill passed by the House would make this worse by eliminating the “deductions for state and local income taxes”. It would also cap property tax deductions at $10,000 a year and cut the mortgage interest deduction cap in half. While these provisions were enough to convince three California Republicans to vote against the bill, Knight still voted “yes.”

The bill passed by the Republicans has enough toxic provisions to ensure that Californians are not the only ones who would be negatively affected. It has been estimated “that half the benefits of the bill go to the top 1 percent by 2027” while “many of the people facing tax hikes are solidly middle class ($40,000 to $75,000) or else in the “upper upper” middle class ($200,000 to $400,000)”. Middle-income Americans will lose the ability to deduct student loan interest while graduate students would face a new taxation if they receive a tuition waiver. In a move that will greatly affect the elderly, medical expenses can no longer be deducted under the bill passed by the GOP. Employees would be taxed if their employers provided them with education assistance or reimbursed them for dependent care expenses. Were these the “special interest loopholes” that Knight was referring to in his statement announcing that he had voted for this measure?

“The House Republican tax writers’ plan is estimated to add $1.49 trillion to the deficit over a decade”. On his campaign page, Knight declares that “the unsustainable debt currently being passed on to our children is morally wrong and is a blatant act of generational theft.” Putting corporate tax cuts above the children of his district, Knight voted to approve the GOP tax plan. Is there a question as to who he is actually representing?