It is all about testing. The test publishers are getting richer, while controlling the curriculum. They prepare the tests and the test preparation materials.

Is the goal of education today to improve test scores or to generate a dumbed down generation?

Sign The Petition Here (Even if you do not live in Los Angeles): LAUSD: Rescind the TFA Contract

Cancel the contract that pays Teach for America (TFA) to recruit untrained interns to teach our vulnerable special education students. Identify reputable programs to recruit graduates and student teachers who are committed to the teaching profession, to our schools and our students.

Would you want to be Superintendent?

Miller, Cortines, Romer, Thompson, Brewer, Anton, and Handler.  Not a basketball team, but the names of the LAUSD Superintendents over the last 30 or so years.

Is the District truly governable?  It is large and unruly stretching from Chatsworth to San Pedro, from East Los Angeles to Pacific Palisades. It takes in students from cities and county areas:  Gardena, San Fernando, Carson, West Hollywood, Marina del Rey and more. At some schools parents are involved and truly act as stakeholders, yet at other schools parents are just trying to survive in this world. 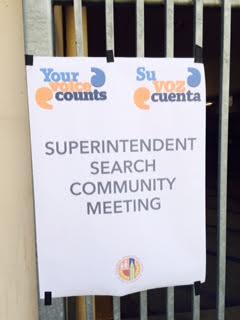