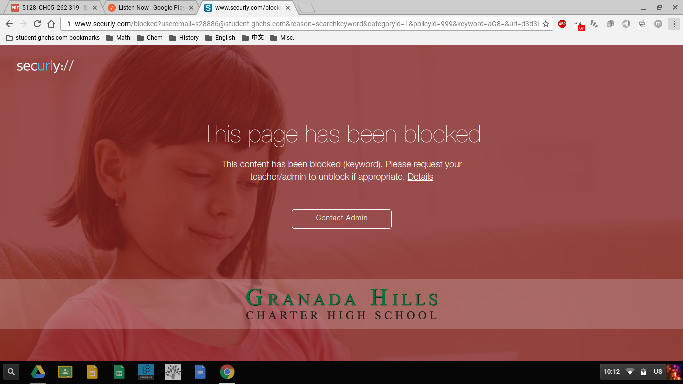 As a child the first thing I did when presented with a new dictionary was check for the swear words. I already knew what they meant, but their presence validated the authenticity of the reference; if I could be trusted to know that these words existed, then surely the rest of the contents were worth exploring. Unfortunately, my daughter accidentally found this weekend that her school does not have that same trust in her.

While answering questions for her history assignment my daughter found that her text book did not provide her with the information that she needed for Ho Chi Minh and turned to the web for additional assistance. Using her school issued Chromebook she typed in the name of the former President of North Vietnam into Google. Unfortunately, instead of relevant information she was informed that the search results had been blocked.

Following the directions on her screen, my daughter e-mailed her teacher to ask why the results had been blocked. Unfortunately, he could not solve the problem. Perhaps this was not something he wanted to deal with on a Sunday or maybe he did not actually hold the power suggested by the message. In any case, he told her that he had no idea why the system had blocked the search results and suggested that she answer the questions using what was available in the text book.

This answer only served to stoke my daughter’s curiosity. Her first inclination was that the censorship was based on ideology. However, typing “Karl Marx” into the search engine provided the expected results without being blocked. We brainstormed together and thought that maybe it had something to do with him being on the opposite side of us during the Vietnam war. This was proven wrong when typing in “Ho Chi Minh City” triggered the same blockage. We were now both stumped.

It was not until several hours later (the power of latent thinking) that I had a new idea. She keyed in “Chi Minh” and finally was able to access the needed search results. Apparently, the filter the school uses determined that students need to be protected from the word “ho”. Sailors should find a new way to announce the sight of land and Santa should be red-faced over his chosen expression of glee.

The Internet provides a wealth of information at our fingertips and some of this was not meant to be accessed by minors. For example, a filter for pornographic images should be mandatory on computers issued by a school. However, these filters need to be smart enough to allow images like the 1972 Pulitzer Prize winning picture of children running from a napalm attack even though one of the girls had had her clothes burned off and was naked.

Censorship presents a particular danger to intellectualism whenever it tries to block the use of words. I have always taught my children that there are no such thing as “bad” words. Instead, they may be inappropriate in certain contexts. The “ho” in this story illustrates the point.