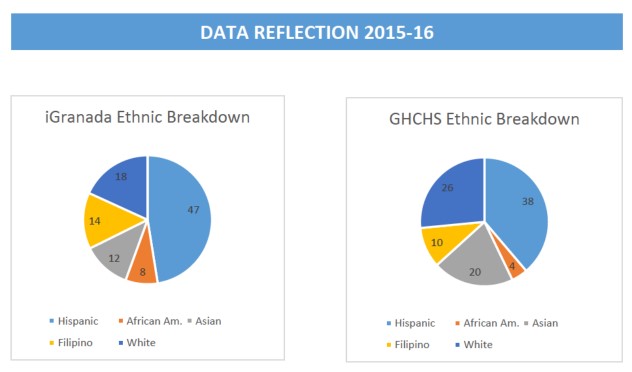 While the LAUSD’s Charter School Division (CSD) maintains that Granada has “increased its diversity over time” and lauds the school for “a 5.0 percent drop (32.3 to 27.3 percent) in its White student population”, the demographic data for other racial groups paint a different picture. Prior to the conversion, the school’s population was “25% Asian and 6% black.” In 2012, these populations had fallen to 17% and 4% respectively. As noted in the proposed Holding GHCHS Accountable to Their Charter resolution, 6%of GHCHS’ student population has special education needs, almost half the average for the state of California. Only 3% of the students are English learners, down from 9% in the 2002-2003 school year.

The California Education Code specifies “that an existing public school converting partially or entirely to a charter school...shall adopt and maintain a policy giving admission preference to pupils who reside within the former attendance area of that public school.” Accordingly, Granada’s current charter specifies that “as an independent conversion charter school, first preference for enrollment will be given to students residing in the former attendance area.” Violations of these provisions were the basis of a Notice to Cure that was issued by the CSD on June 22, 2016, directing the school to “take immediate action to address the admission practice and policy that denies prospective resident students the opportunity to be admitted into the main campus throughout the school year.” Almost 18 months after the issuance of this notice, Granada maintains that “the law does not require adopting and maintaining [the preference for resident students] only, or to the exclusion of other admission preferences” and refuses to comply with the demands of the District or parents who have filed complaints against the school.

At the heart of the conflict is Granada’s insistence on reserving seats for its iGranada “independent study” program, even if parents and students have shown through the complaint process that they would rather receive access to the traditional program. Unlike those on the main campus, classrooms in iGranada are supervised by non-credentialled teachers. Despite the law’s requirement “that instruction may be provided to the pupil through independent study only if the pupil is offered the alternative of classroom instruction”, 70 ninth grade students were enrolled in iGranada instead of hiring credentialed teachers to teach them in the traditional classrooms. If parents refused the placement and instead enrolled their students in other schools while waiting for room in the traditional Granada program, they lost their place in line. This seems to have little resemblance to parent choice.

The resulting demographic differences between the iGranada and the school’s traditional programs are very concerning. While 38% of students in the traditional program are classified as Hispanic, they comprise 47% of the students enrolled in iGranada. The African American population in the independent learning program is double that in the main program. This presents a clear example of the return to a separate and unequal education system that formed the basis of the NAACP’s call for a moratorium on new charter schools until methods for real accountability can be put in place.

Even more troubling is the fact that students with Individual Education Plans (IEP) are being forced into the iGranada program. While Granada’s Executive Director, Brian Bauer, has unilaterally decided that “iGranada is appropriate for students with individual education plans”, the education code requires “students with special needs who wish to participate in independent study to have an individualized education program (IEP) that provides for independent study.” No matter how much Bauer believes that iGranada is needed to break traditional “lecture-style classroom conventions”, he should not be entitled to break the law to ensure its survival.

Granada was converted to a charter on the promise to move decision making from LAUSD headquarters to parents and teachers at the local level.  When a parent’s prediction that her child’s assignment will “be a recipe for disaster” is not only ignored at the time it is made, but after it is borne out by results, then the promise of choice is unfulfilled. One bureaucracy has simply replaced another and students with the highest needs are ignored.