“I am especially addressing those who have been expressing their frustration with the lack of transparency during the last ten days, when every member of the Board knew that decision had already been made while pretending to be maintaining an open mind toward all the candidates who were deemed finalists.” 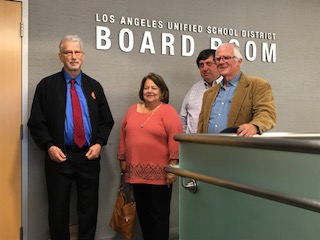 On Tuesday, May 1st, I joined five former LAUSD Board members, teachers and other members of the public in urging the District not to hire Austin Beutner as the District’s new Superintendent. What none of the speakers knew was that on April 20, the Board had voted 4 - 3 to “to authorize negotiations for an employment contract with Mr. Austin Beutner as the General Superintendent of the District” but had not divulged the results to the public. This not only violated the rules of open governance but the public trust.

The District had bypassed public input for their decision with the excuse that the results of the input from the last search were only two years old and still valid. However, that search found that stakeholders “wanted an educator to be the leader of LAUSD.” As summarized by former Board member Monica Ratliff, “they wanted a teacher, a principal. They wanted someone who knew L.A.” Instead, the Board went behind closed doors and selected someone who had “no background leading a school or school district” to lead the country’s second-largest school district. Also, according to California Education Code Section 35029 Beutner had to be provided with a waiver because he does not hold “an administrative or teaching credential”.

While Austin Beutner “does not have an education background,” he does bring some experience to the table. For a one year period he served as the Publisher of the Los Angeles Times, after which he was “abruptly fired”.  He is the founder and chairman of Vision to Learn, “a nonprofit group that could lose its LAUSD contract for not meeting expectations.” Perhaps most tellingly, Beutner has co-chaired a task force for the past year that has presented recommendations for the LAUSD to operate “more openly.” Judging from how the Superintendent search was conducted, this was also not a successful endeavor.

While California’s open meeting laws do allow local governments to conduct discussions about employment issues in private, they are still barred from keeping the results of these meetings from the public. Board Member Schmerelson reports that on “April 20, by the slimmest majority possible, four members of the LAUSD Board of Education (Garcia, Melvoin, Vladovic, Rodriguez) voted to authorize negotiations for an employment contract with Mr. Austin Beutner as the General Superintendent of the District.” However, it does not appear that this vote was reported. In fact, when the Board’s Executive Officer, Jefferson Crain, reconvened the April 20 meeting at 6:19 PM into public session, he stated that there were “no actions to report due to today’s discussion.” Any vote taken was an action and should have been reported at that time.

Board President Mónica García would like her fellow Board members to put these actions aside so that the District can “get to work!” However, by leaving parents out of the conversation and apparently ignoring the law, she has possibly doomed her selection before he even signed his contract. The situation was made worse by the fact that Ref Rodriguez was allowed to be the deciding vote, even as he faces felony charges of perjury related to his election and was recently arrested for public drunkenness. It is clear that the District’s new leader not only lacks an education background, he lacks a mandate.

When the new Board majority took over last year they promised to put “kids first.” When will this start?

“It's easy to talk about putting kids first. But, I believe that the Board majority has forced a process and made a decision that clearly overlooks the well-being of our kids in favor of a political agenda”.