Broken Promises: Another Failing Charter Gets A Pass

“It’s not about the kids” 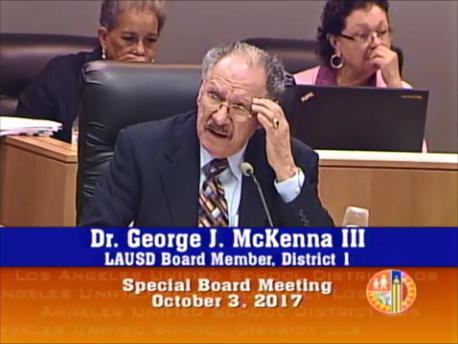 When the LAUSD School Board handed control of Locke High School to  Green Dot Public [sic] Schools in 2007, the school ranked “among the lowest-performing schools in the Los Angeles Unified School District and in the state.” At that time, Green Dot’s Steve Barr said that if this public school was given to his unelected charter organization they would “work together [with parents and teachers] and make Locke a great school.“ He further promised that “people around the country are going to come to Watts and see what a great urban turnaround school looks like."

Ten years later nobody is calling on Green Dot to provide their key to success. In both 2015 and 2016, the California Charter School Association (CCSA) gave the school a Statewide Rank of one out of ten. The LAUSD Charter School Division ranks its Student Achievement and Educational Performance as “Developing”, or a two on a four-point scale. When compared to Resident and Similar Schools Medians, “Locke reclassified [English Learners] at a lower rate”, had “low graduation rates” during the past three years, and “has a high disproportionality suspension rate for African Americans and Students with Disabilities.”

In providing the reasons for their failures, one of the principals for the schools states that “the truth of it is, [the students] are coming from poverty. They are coming from a community where the average income is about $17,000 for a family.” He continues: “We have a lot of students that come from foster care, that are returning from camp. We have students that come from single-parent households, from neighborhoods with high crime. They are coming from the housing projects...and we have a really high transiency rate.” However, these conditions did not suddenly develop in the last ten years; they were not an adequate excuse for the failures of the LAUSD and they should not be one for Green Dot. On its webpage, Green Dot says that it “is proving it can achieve better student outcomes with the same student population”. Not in the case of Locke.

Even worse, the CSD’s report shows that Green Dot is headed in the wrong direction. Despite new Board Member Kelly Gonez’ assertion that “there is a story of progress here”, the CSD’s Student Achievement and Education Performance score was lowered from the one it achieved in 2015-16. “In 2016-2017, the reclassification rate [of English learners] for the charter school showed a 5.1% drop from the prior year”. The graduation rate went from 61.6% in 2014-15 to 55.9% in 2015-16. Their ninth-grade principal may think that they “are moving the needle in the right direction”, but the data does not back her up.

One reason for these declining results may be the school’s reduced financial solvency. In its report, the CSD reduced Locke’s Fiscal Operations score from “Developing” to “Unsatisfactory” and noted its “fiscal condition is weak and has been downward trending since the 2013-2014 fiscal year.” It also noted that the 2016-2017 unaudited financial statements “indicate negative net assets of ($6,350,490) and a net loss of ($1,346,946).” Even though Green Dot is operating the school at “a net deficit”, the issue of the school’s financial status was not discussed by any of the Board Members during the lengthy discussion at their meeting discussing a renewal of the charter.

Green Dot also does not seem committed to serving all students within the former school district boundaries. For example, 0% of its students are identified as Gifted and Talented (GATE). The school is singularly focused on college preparation and a critic of the original charter noted that “vocational education...was barely mentioned, if at all, in the [original] petition.” And while Green Dot claims that there “has been a 90% reduction in suspensions since the ninth grade academy was created”, the suspension event rate for students with disabilities was at 9% in 2016-17. Yet, the solutions proposed by the school did not include behavioral support or any other program focused on those with special needs.

Despite the overwhelming evidence that the students of Locke High School need something better than what Green Dot is willing or able to provide, the LAUSD Board voted to renew the charter for another five years. Dr. George McKenna was the only vote against this renewal. Once again, it is clear that it kids are not the first priority in the LAUSD. The priority is the charter industry which throws millions of dollars into our School Board elections.