Character Assassination in the First Degree

“Pursuant to Gov. Code §6254(f), the records you have requested are exempt from disclosure.”

The LAUSD Inspector General’s (IG) office seemed confident in their audit of the Food Services division when they stated in their draft report “that the program is currently at a minimum being mismanaged and at worst being consistently abused.” The fact that this was a “confidential personnel matter” did not stop the District from releasing this report to the press, which then said that the Food Services Director David Binkle had been suspended with pay. Actually, like those in “Teacher Jail” Binkle was actually “re-assigned,” literally under house arrest. During work hours he was forbidden by the District to leave his house as he waited for inspectors. He reports that those inspectors never showed up to hear his side of the story. It was unclear why these investigators had not concluded their investigation before writing a report and publically dragging an honored employee’s name through the mud. In February, the IG said they expedited the audit “to be completed by early summer.” With this deadline long past, the District said on Thursday that it is still “ongoing.”

Binkle showed a misplaced trust in District leadership when he told the Los Angeles Times that he was “confident the truth and facts will show the allegations are unsubstantiated.” Instead, his reputation has been besmirched as the LAUSD actively prevents the disclosure of information that could exonerate him. Binkle insists that his superiors, including Superintendent candidate Michelle King, approved of the allegations specified in the audit. Since August 4, they have been dragging their feet on a public records request that could provide documents backing Binkle’s claims, but the Office of the General Counsel decided last week that since “the Audit made references to Mr. Boull’t [Mr. Binkle’s supervisor] and to the LAUSD I’M In campaign” and “the Audit and its findings are the subject of an on-going investigation,” these records “are exempt from disclosure.” This decisions comes over a month after the legally mandated deadline to claim this exemption.

The LAUSD is refusing to comply with a Public Records Act request based on an exemption is meant to protect the integrity of investigations. However, that integrity was already compromised when the District publically released a draft report that they admit was based on an incomplete investigation. They have carefully orchestrated which information they will release in order to end the LAUSD career of someone who has been called “the good guy who was listening to parents’ concerns and not bringing Bic [Breakfast in the Classroom] to schools that were overwhelmingly against it,” but continues to block the public from seeing anything that could clear Binkle’s name. Conveniently, with Binkle removed from the picture, the District completed their rollout of BIC by forcing it on schools like the Sherman Oaks Center for Enriched Studies that  had fought long and hard to keep it from their campus.

The  OGC has already stated that are at least two emails that “have been found for the month of January 2013 related to the phrases ‘Request for Travel’ and ‘LAUSD I’M IN.’” If either of these was a “Travel Conference Attendance Request” initiated by Binkle and sent to Enrique Boull’t” that specified that “travel will be paid through the LAUSD I’M IN marketing funds,” it would be clear that Binkle was not trying to hide his actions. A marking of “approved” on this document would go a long way towards proving Binkle’s assertion that his “actions were approved...from senior district officials.” If Michelle King was  included in either one of these documents, then they would be relevant to her qualification to be Superintendent.

After the LAUSD threw Rafe Esquith into Teacher Jail, his attorneys filed suit against the District claiming that the “continued defamation by LAUSD knows no bounds. This is a slap at all hard-working teachers and it has created a declaration of war against LAUSD.” As Scott Schmerelson correctly pointed out during the 2015 Candidate Forum for Board District 3, “Teacher Jail” was misnamed because it also affected other types of employees and David Binkle’s ordeal proves his point. Schmerelson also promised during his swearing in ceremony that he would work to end bullying in the District, including the bullying done by adults.  This stance puts him in the best position to protect the LAUSD from a protracted, expensive legal battle by creating an environment that would end the hostilities. A good first step would be to force the release to the public of all the information about Binkle’s case. 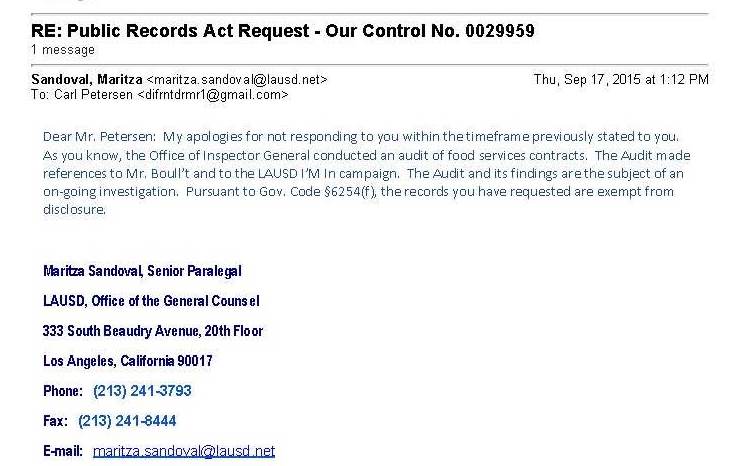