“A gun has killed 17 of my fellow classmates. A gun has traumatized my friends. My entire school, traumatized from this tragedy. This could have been prevented.” 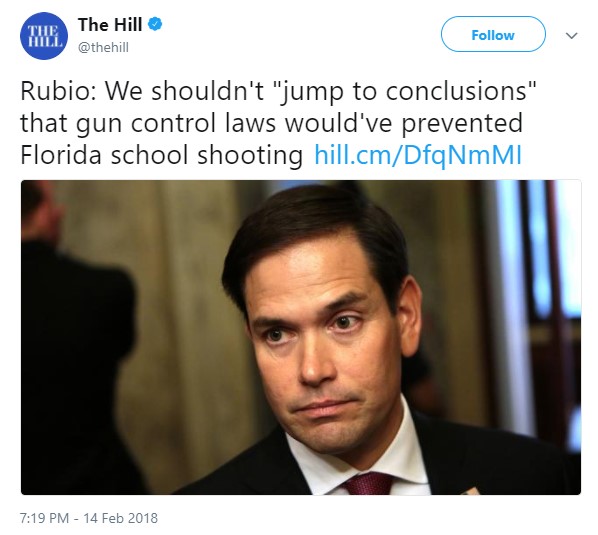 If the shooter in Parkland, Florida had been named Mohamad, we can be sure that Donald Trump would have immediately taken to Twitter in an effort to use the tragedy as proof for the need of his Muslim ban. If instead, it was Jesus or Jose, the subject of those Tweets would have been his border wall. Instead, the killer was just a run of the mill domestic terrorist who used a gun to kill 17 people in a high school. Therefore, we will be told to offer hope and prayers and ignore that this was the eighth school shooting in this new year. To do otherwise politicizes the tragedy and disrespects the victims and survivors and their families.

America failed the students, staff, and families of the Stoneman Douglas High School. We put the profits of the gun industry ahead of the lives of our children and allowed this needless cycle of death to continue. We elected politicians who we knew were in the pockets of the NRA, ignoring all the other previous school shootings and letting the students from Columbine and Sandy Hook to die in vain. We allowed hopes and prayers to replace action.

The survivors of our latest mass shooting are having none of it. David Hogg, a senior and editor at the school’s TV station faced death by pulling out a camera during the shooting so that he and his fellow students could “get the message out there, about how we want change to be brought about.” He continued the next day by stating “when you don’t take action, things like this eventually will happen to you. And that is not acceptable...Don’t stop fighting because children will continue to die if we don’t take a stand now.”

When right-wing commentator Tomi Lahren callously politicized the pain of these students by stating that “this isn't about a gun it's about another lunatic”, the students fought back. Carly Novell claimed the high ground on the debate by pointing out that she was the one “hiding in a closet for 2 hours.” From the perspective of a person whose life is forever changed by the incident, she stated that “Guns give these disgusting people the ability to kill other human beings.” The student also answered Lahren’s question “Can the Left let the families grieve for even 24 hours before they push their anti-gun and anti-gun owner agenda?” with blunt honesty. “While we were in there we were still talking about gun control and how something needs to change. We were in a closet and were still thinking about this...There is no waiting period...This is what needs to change.”

The issue of gun violence is a storyline that can easily lead to cynicism. Trump’s first comments on the tragedy didn’t even mention guns, substituting the need to work on the issue of mental health. This after he signed a law revoking the ability of those “who weren't able to manage their affairs because of ‘marked subnormal intelligence, or mental illness, incompetency, condition, or disease’” from purchasing a gun. However, the bravery of these students in speaking out in a time of immense pain is a sign of hope. If six and seven-year-olds dying in Sandy Hook could not shame the American people into a meaningful debate on this subject, perhaps angry teenagers can force the issue. 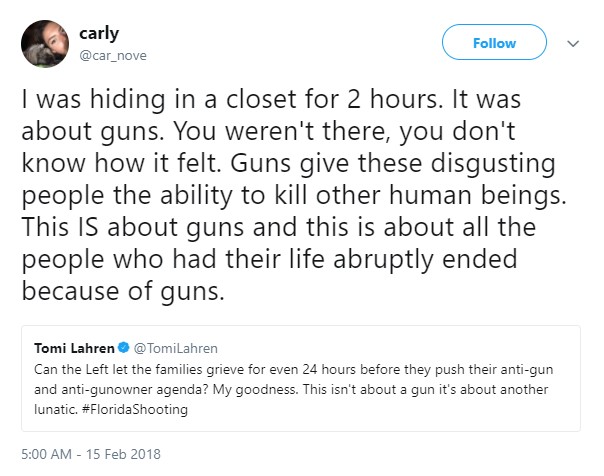 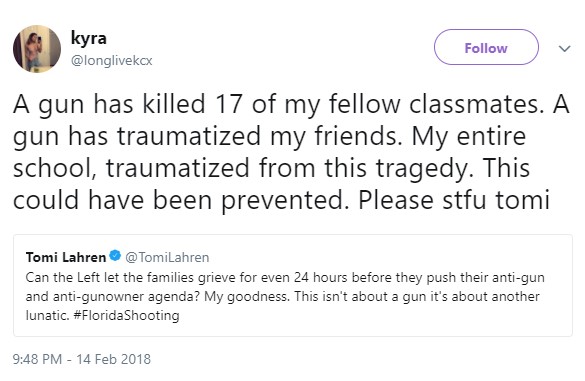