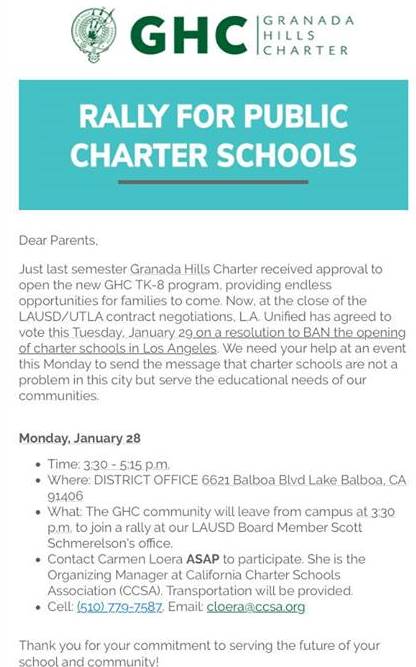 With a charter that has already been approved by the District, Granada will be unaffected by a proposal that would look into “a plan to pursue laws intended to authorize a moratorium on new charter schools within the boundaries of the District”. Still, they are using public education funds to coordinate a rally in front of LAUSD Board Member Scott Schmerelson’s Valley office to oppose the measure, misleadingly telling parents that it will “ban the opening of charter schools in Los Angeles.” The California Charter School Association (CCSA) is planning additional protests when the full LAUSD Board considers the motion on Tuesday.

The charter industry’s opposition to the Board resolution provides yet another example of how these privately run schools want to avoid any accountability for the public funding that they receive. While they pretend to support closing down underperforming charter schools, the CCSA has cried foul in the rare event that any of their schools are held up for scrutiny. In fact, even with the numerous documented problems at Granada, the CCSA supported their charter renewal and expansion.

According to Schmerelson, “82% of existing charter schools operating within LAUSD are under-enrolled”. This not only calls into question the charter industry’s assertion that their schools have waiting lists but also seems to indicate that there are more than enough charter schools to meet demand. Now would be a good time to hit the pause button and evaluate the results of the 25-year experiment in privatizing education.