One of the promises that I made to my supporters after the election was that I would continue fighting for change within the district. I have followed through with continued coverage of Teacher’s Jail, including the District’s ever expanding investigation against Rafe Esquith. As a result of one of these articles, I was contacted by David Binkle, who headed the LAUSD’s Food Services division. Mr. Binkle not only broke the news to me that he was retiring, he spent a couple of hours detailing how he had been micromanaged from the top. If what Binkle was telling me was true, it was clear that he had been set up as a scapegoat and the real fraud had occurred at the upper echelons of the district.

Verifying Binkle’s most basic claim should have been easy. The District’s leaked report accused him of illegally using marketing funds to travel to conferences, but Binkle told me, as he had stated previously in the press, that these trips and their funding source had been approved by his superior. Knowing exactly what I was looking for, I submitted a simple public records request on August 3, 2015:

Pursuant to my rights under the California Public Records Act (Government Code Section 6250 et seq.), I ask to obtain a copy of the following, which I understand to be held by your agency:

The period of time covered by this request is the month of January 2013. 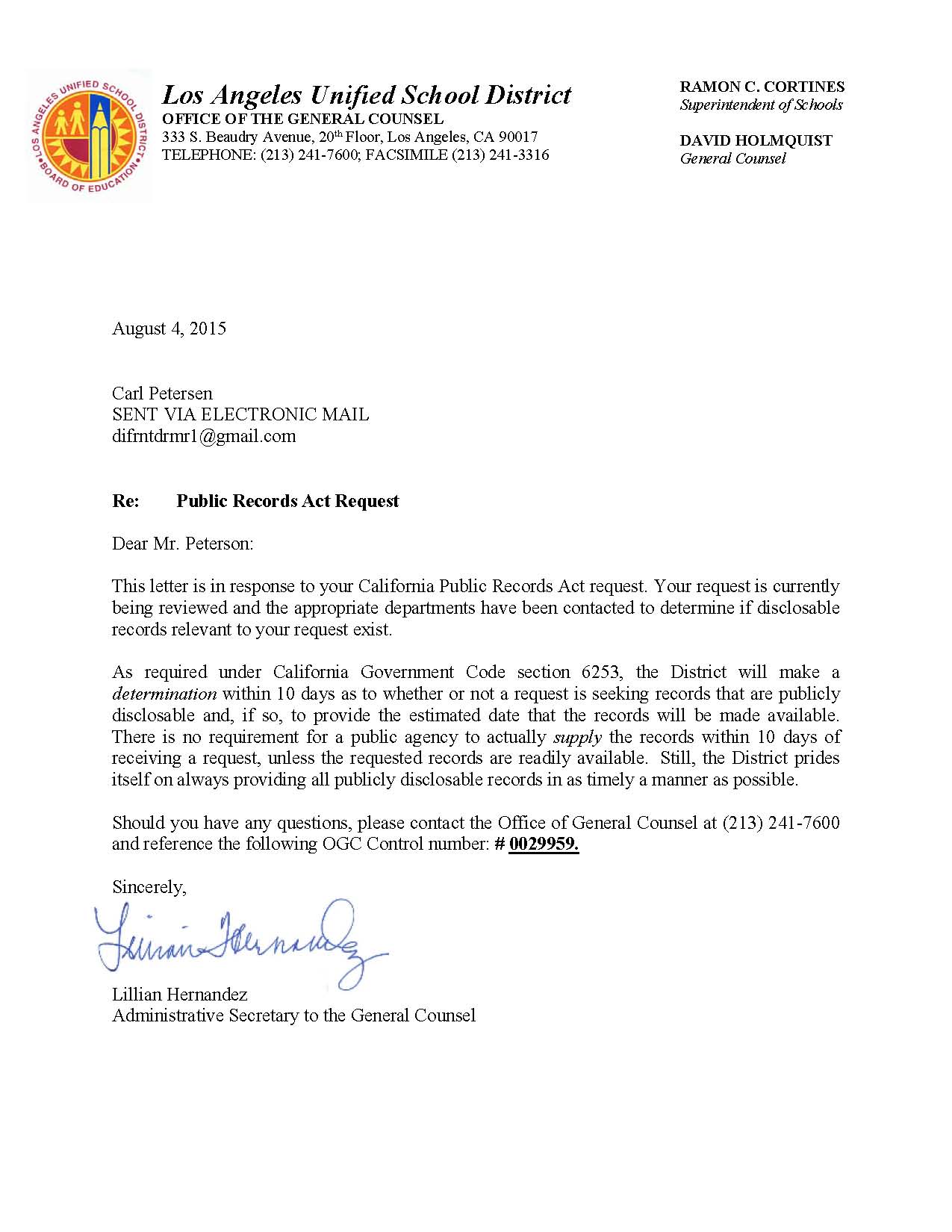 Unfortunately, my first attempt to deliver this request was thwarted by District’s blocking of my IP address which prevented me from sending e-mails to their server. After using a different computer and email address, I received confirmation of my request from the General Counsel’s office. The clock was ticking. 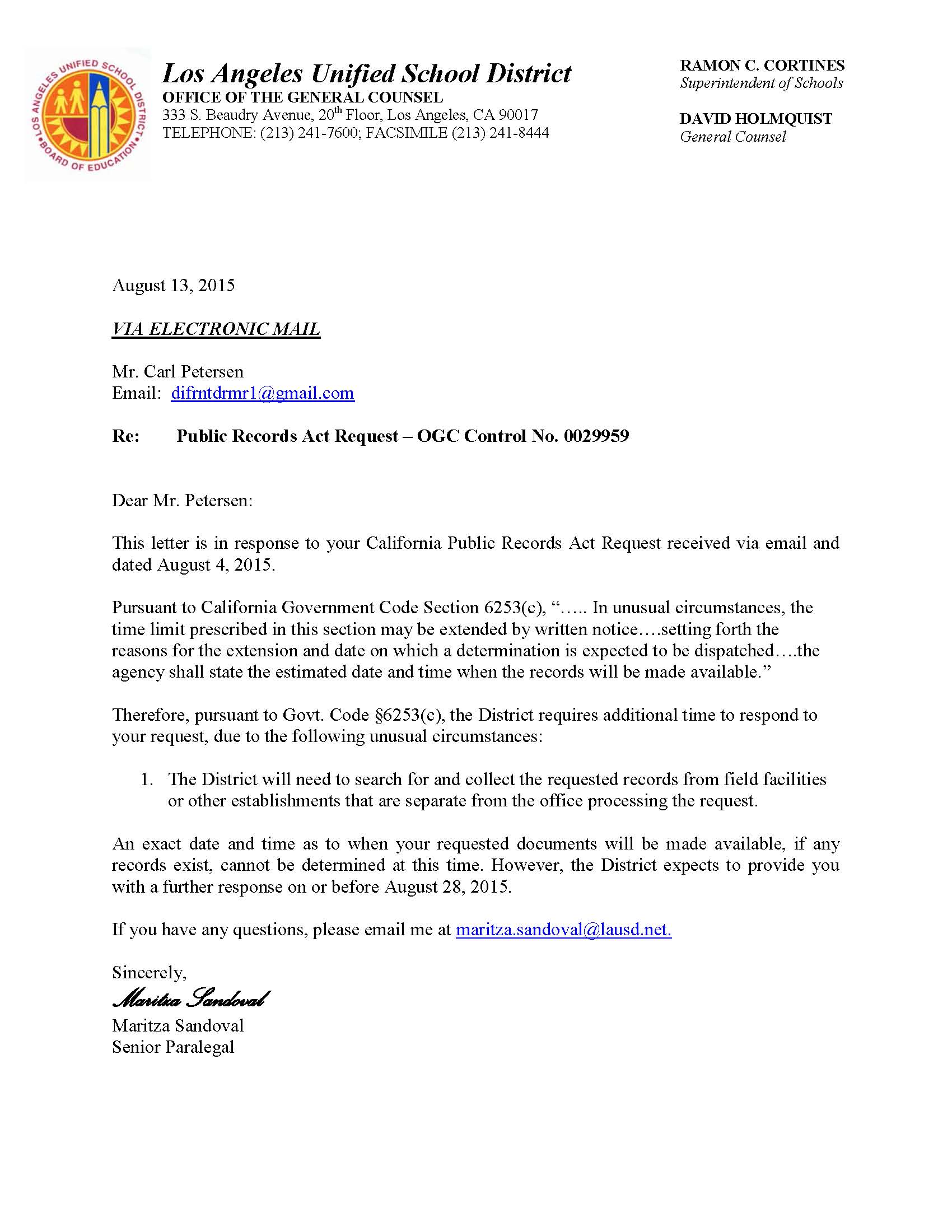 Given the fact that the information I was requesting was relevant to a supposedly ongoing investigation, it should have been recently accessed and, therefore, not stuck in some dust covered box in a remote warehouse. It should also be noted that I was only looking for correspondence from two employees during a one month period, so the request was not overly broad. Still, as the deadline approached, the district sent me letter stating that due to “unusual circumstances” they needed additional time to process my request. They expected to provide “a further response on or before August 28, 2015.”

I did not receive that response and on August 31, I asked for an update. On September 3, I was sent an email stating that “so far, only two emails have been found for the month of January 2013 related to the phrases ‘Request for Travel’ and ‘LAUSD I’M IN’” and they were still “working on this matter in an attempt to find additional emails, if any.” This was curious, because I had asked for not only emails, but also memos, interoffice correspondence or letters. Also, if they were only searching e-mails, why was this information not instantly available through an electronic search? In any case, I was told that they would provide me “with an update and final response on Tuesday, September 8.” I am still waiting for that response.

The questions left unanswered by the District’s stonewalling are not insignificant. Most importantly, Binkle deserves a chance to publicly prove his innocence after his character was publicly assassinated by the District.  Also, the taxpayers and stakeholders deserve to know why a District that constantly claims poverty was paying Binkle his $152,000 a year salary to sit home on paid leave if he was actually innocent of the charges leveled against him. Additionally, it has been widely reported that Binkle brought many positive changes to the food services program. If this is the case, have the students been unnecessarily harmed by his forced retirement?

This case also plays a role in the ongoing search for a new Superintendent. Steve Zimmer has called Michelle King “a ‘top candidate’ to replace Ramon Cortines,” but she sat above David Binkle on the chain of command. If the Inspector General is correct in his assertion that “the program [was] at a minimum being mismanaged and at worst being consistently abused,” then the public deserves  to know how this was allowed to happen by senior district staff, including King. This is especially crucial since  Binkle has stated that his actions were approved. A simple release of documents will prove if this is true.