LAUSD's Board District 5 Is Still Unrepresented 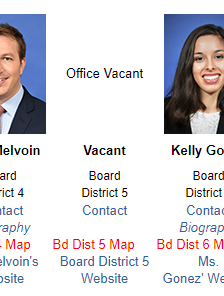 It has been almost three months since the LAUSD School Board rejected Board Member Scott Schmerelson’s “Providing a Voice and a Vote for the Constituents of Board District 5” resolution. As a result, the seat vacated by Ref Rodriguez has remained empty as the LAUSD careens towards a teacher’s strike. One-seventh of the LAUSD’s stakeholders have had no voice while Superintendent Austin Beutner is working on a secret plan to make another attempt at reorganizing the District’s bureaucracy. Parents had no one to turn to as yet another under-regulated charter school within Board District 5’s boundaries closed down in the middle of the school year.

At the meeting where Schmerelson’s resolution was considered, Board Member Nick Melvoin claimed that he wanted a temporary replacement to be named but felt that the community should have more input. He, therefore, attempted unsuccessfully to hijack the resolution with a substitute motion that would have had the Board collecting resumes from members of the community interested in serving. Melvoin could have had his staff perform this task and introduced these candidates to his fellow Board members. However, he took no such action proving that he had no real intention of voting to put anyone in the seat.

At the same meeting, Board Member Richard Vladovic stated that he felt that naming anyone to the seat was undemocratic. However, he did state that he would consider voting for Bennett Kayser, as he might have won the election if Rodriguez had not cheated. Nothing was said about Andrew Thomas, although his candidacy was also affected. In any case, Vladovic has not proposed a motion in the past three months that would have allowed either man to fill the seat.

While Schmerelson should be commended for making the original motion, neither he nor Board Member George McKenna has followed up on the issue. At the very least, they should have called Speak Up’s bigoted bluff by making a new motion that nominated a Hispanic candidate who supports public education as the temporary replacement. 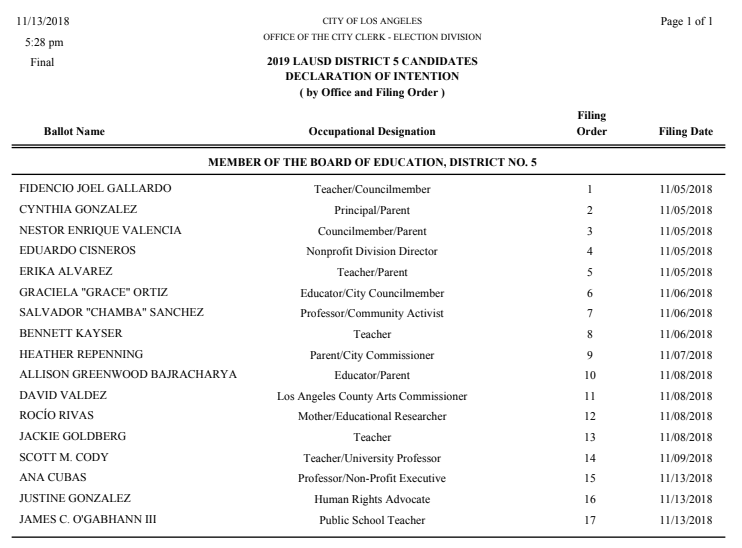 With the field of candidates settled for the special election that will be held in March, voters should take note of those who took sides in the fight to name a temporary replacement to the Board seat. While Rocio Rivas helped push Rodriguez to resign and supported Schmerelson’s motion, her opponent, Justine Gonzalez, was one of the speakers who said that Board District 5 should not have representation until the election could be held. Gonzalez was listed along with Allison Bajarcharya, Graciela Ortiz, and Eduardo Cisneros on a flyer by Speak Up, the group that said that being white disqualified someone from representing Board District 5. This seems like a poor choice by someone who describes herself as a “Human Rights Advocate”.

Since there are 17 candidates in the special election, it is unlikely that an elected representative will be seated before the end of this school year. With so much going on in the District, including a threatened takeover by the county, no stakeholder should be purposely unrepresented. The six seated LAUSD Board Members need to appoint someone immediately.