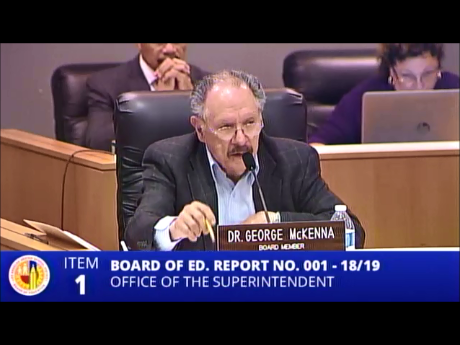 Unfortunately, district students will pay a price for the opportunity to get access to badly needed funds. While the district will be absorbing the financial risk of paying for the election, charter schools are guaranteed to receive a share of the revenue-based solely on their percentage of the total student population within the district boundaries. While “the Measure would require fiscal accountability and oversight provisions”, it is unclear how this would apply to the charters given the district’s poor record of providing oversight over these publicly funded private schools. For charters authorized by the county and the state, there will be absolutely no oversight by the district to ensure the fulfillment of the promise of transparency and accountability that has been made to voters.

The revenue sharing guarantees written into Measure EE exacerbate the negative effects of privatization on the LAUSD, but is this enough to justify voting against the parcel tax? Proposition 13 has ensured that California public schools are chronically underfunded. Trump’s attacks on funding for special education programs means that money from the federal government is also likely to be reduced. With students facing class sizes that are too large, elementary school libraries without library aides and schools struggling to meet the needs of the communities that they serve, the chance to secure additional funding is much too important. Measure EE needs to be supported.

While the loss of 20% of the revenue to charters from the parcel tax is a tough pill to swallow, it should also emphasize the need to bring accountability to the charter school industry. This includes overcoming resistance from the CCSA and passing the four measures before the state legislature that would bring much-needed changes to the state’s 25-year-old charter law. Locally, the LAUSD’s Charter School Division must be revamped and the Board empowered to revoke the charters of schools that refuse to conform to the rules. Board members who forget that the 80% of students who attend LAUSD schools should be their first priority must be opposed and removed from office.

The sacrifices made by teachers and parents during the strike brought the problems facing public education to the forefront of public consciousness. The approval of Measure EE provides the opportunity to take another step forward, even if allies of the charter industry have made it an imperfect vehicle for change. That is not a problem if we vow to continue the fight for public education.