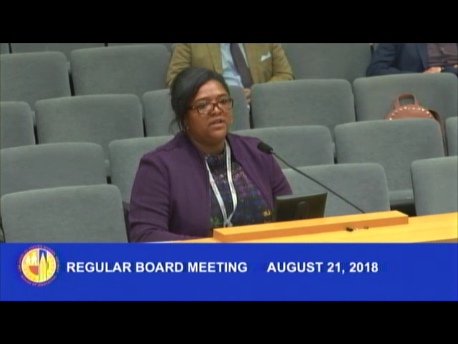 “Under her leadership, she has made important changes in her departments, which I expect will be sustained.”

The Los Angeles County Office of Education (LACOE) provides oversight over the 80 school districts within the county and can take control if it finds that any of these districts are in danger of becoming insolvent. Therefore, CFO Candi Clark caused a lot of alarm when she made a surprise appearance during public comment at a Los Angeles Unified School District (LAUSD) Board meeting last August. Her warning that the county was concerned about the District’s finances were seen as a vindication from an independent source that the LAUSD could not afford the union’s demands during the ongoing contract negotiations.

When United Teacher’s Los Angeles discovered through a Public Records Act request that Clark’s speech had been written on an LAUSD computer, the motivation of her appearance was called into question. Instead of providing independent confirmation of the District’s position she now appeared to be part of a coordinated effort to sway public opinion. An orchestrated appearance would have also been a violation of the Brown Act as she spoke on a subject that was not part of the agenda. This would have been allowed if she was simply giving comment as a concerned member of the public, but not if members of the Board had any part in her performance.

Yesterday, LACOE announced that Clark will be leaving “LACOE at the end of February to pursue a new venture in full-time consulting for education agencies.” Given LAUSD Superintendent Austin Beutner’s propensity for hiring outside consultants to do his bidding, one only has to wonder if the District will be one of her new clients. Perhaps this would be too obvious of a payoff and Eli Broad and the rest of the charter industry will arrange for her to receive work through one of the other school districts that they control.

Clark will leave behind a culture at LACOE that has been groomed through Alex Johnson and Mark Ridley-Thomas to do the bidding of those who would like to privatize our public education system. After all, this organization has authorized charters that even the LAUSD Board judged unworthy of renewal. In at least one case, they did so without having a current, certified copy of the school’s required annual independent audit. When the LACOE Superintendent says that changes Clark made “will be sustained”, we should all be very concerned.