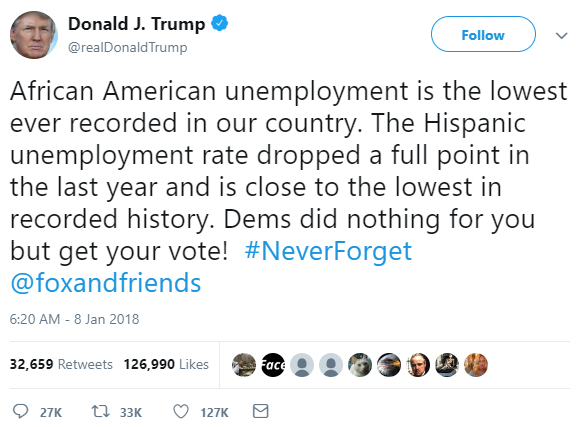 The key to successful branding is a consistent focus on messaging and Trump has brought this skill to the White House. Dare to bring up any criticism of the self-declared greatest president of all time, he and his supporters will quickly pivot to some proof of success, no matter how irrelevant. Trump cannot be a racist, “African American unemployment is the lowest ever recorded in our country.” He cannot be impeached because “look at the economy”. Ignore any concerns that “the president continues to act in a manner that is detrimental to the health of our republic” because he is “breaking all Jobs and Economic Records”.

To put it bluntly, the Democrats suck at messaging. Trump will declare that he has “accomplished an economic turnaround of historic proportions” and the rebuttal will include a detailed list of how Barack Obama righted a sinking economic ship. This will include the fact that the first 76 months of the record streak of consecutive months of net job growth occurred under Obama, that the stock market rose 148.3% during his presidency and that 2017 was the worst year for job creation since 2011. All of these are true, but none of it matters. Trump has told thousands of lies since taking office, do you think that his followers can be swayed by facts?

If progressives are going to win in the new reality that Trump has created, we need to make sure that we are playing the same game. No, we should not abandon the truth. We do, however, have to learn to break facts down into bite-sized earworms that any fourth grader can understand. These must then be repeated ad nauseam until the other side hears them before they are spoken. 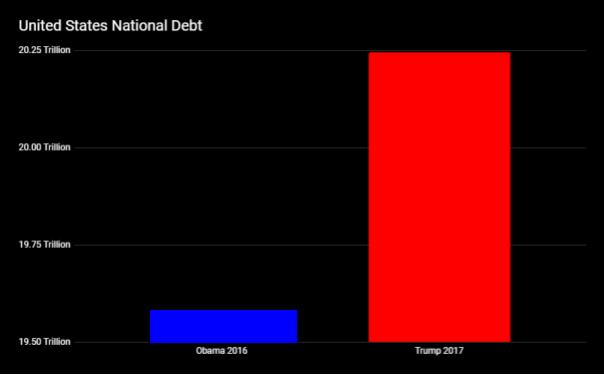 Try this one on for size: Under Donald Trump, the National Debt is the Highest it Has Ever Been. Without context, this statement actually provides no useful information, but it is a data point that cannot be denied.

Who am I kidding? The average Trump supporter will immediately blame Obama for doubling the debt during his presidency, but that is the entire point of this statement. It gives progressives the ability to prove that they acknowledge that there were negative outcomes to the Obama presidency like how the debt was increased substantially. Once that is done, the pivot should be made to asking if the Trump supporter can give Obama any credit for building the foundations that the current president has built on. Most will not, but a virus only needs to take root in one host to start an epidemic. Besides, nothing else has been successful at reaching the minority of the electorate that seems to support him no matter what lies their Dear Leader feeds them. 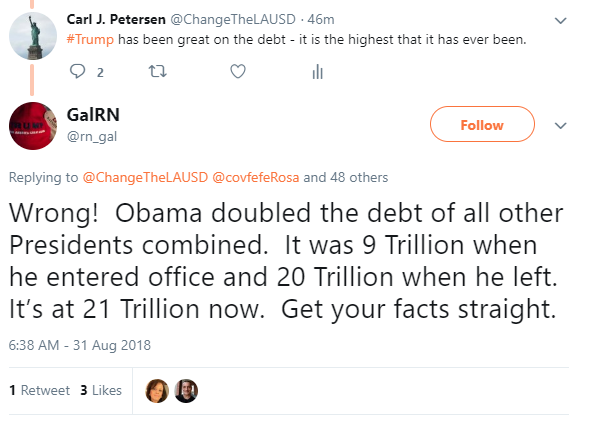