Make it a Headline When Trump Actually Tells the Truth

“Why are we having all these people from shitho**** countries come here?”

Before the public ever thought that Donald Trump would run for President, he “bought space in multiple New York City newspapers calling for the execution of the five black and Hispanic teens accused of raping a jogger in Central Park.” To this day, he still believes that they “were guilty, despite being officially exonerated by DNA evidence” and the fact that someone else has confessed to the crime. To begin his campaign, Trump descended an escalator before a gaggle of paid “supporters” to announce that Mexico was “sending people that have lots of problems”. Unfortunately, it was not poverty or joblessness that he was concerned about but his false accusation that they were involved disproportionately in drugs, crime, and rape. During the campaign, he called for “a total and complete shutdown of Muslims entering the United States”. After Heather Heyer was killed for protesting against white-supremacists in Charlottesville, Trump went off script to declare “that were very fine people, on both sides.” He described any NFL player who would dare to respectfully protest police brutality by kneeling during the National Anthem as a “son of a bitch”. Are we really surprised that he thinks that only white people from rich countries deserve the opportunity to immigrate to our country?

What should be even less surprising are Trump’s attempts to bend reality around his comments. The first official comment on the matter seemed to confirm the President’s words with the explanation that  “Certain Washington politicians choose to fight for foreign countries, but President Trump will always fight for the American people”. Sources within the White House also predicted that the comment would “resonate with his base” and reported that Trump was taking a “victory lap.” With the controversy not dying down, he took to Twitter to declare that reports were wrong as “this was not the language used.” Apparently, instead of saying “shithole” he maintains that he said “shithouse”, which seems to be a distinction without a difference. When the “denial” did not work, Trump surrogates pulled the Obama card and claimed that his predecessor had referred to Libya as a “shitstorm”.

While the talking point states that the press did not cover Obama’s comments, articles were easily found through a Google search. Turns out that Obama was criticizing British Prime Minister David Cameron and referring to the fact “that the intervention [in Libya] 'didn't work' and had left the country a 'shitshow'”, which is exactly the same criticism that Republicans lodged against Hillary Clinton. What Obama did not say was that these conditions should be a reason to refuse admission of Libyans into our country. That would not happen until Trump attempted to institute his Muslim ban.

The problem with a house of cards is that pulling one card can cause the others to fall. Within Obama’s same criticism of Cameron’s handling of Libya was a warning “that the 'special relationship' between Britain and America would be lost if he refused to commit the UK to spending the Nato target of 2 percent of GDP on defense.” That seems to fly in the face of Trump’s earlier assertions that his predecessors ignored this issue. Perhaps that is one reason why Trump’s NATO speech has gone missing from the White House website. If only we could apply that 404 error to the occupant of the Oval Office. 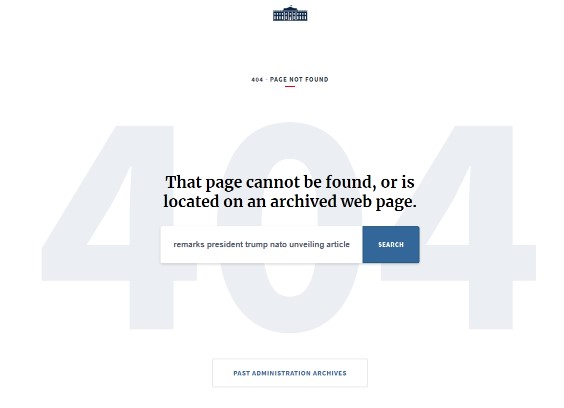