“We urge you to make this a living NAACP action plan with a mandate and roadmap for saving America’s public schools by advocating for public quality education in every sector.”

When confronting the newly anointed Los Angeles County Board of Education President about his support for a charter that was failing its students, Alex Johnson accused me of being “against high-quality education for black and brown students”. Anti-immigrant agitator Arthur Schaper pulled from the same counterfeit deck of race cards to claim that I “believe Black/Hispanic Americans are too stupid to choose the school for their kids”. When presenting at the NAACP Task Force on Quality Education at their hearing in Los Angeles, I was heckled by charter supporters for targeting a “black school” when showing how View Park Middle School was allowed to continue operating despite the fact that it had “presented an unsound educational program”. Apparently, none of these critics realized that my most vociferous criticisms have been of Granada Hills Charter High School and El Camino Charter High School, both of which are located in the San Fernando Valley and serve high populations of white students. 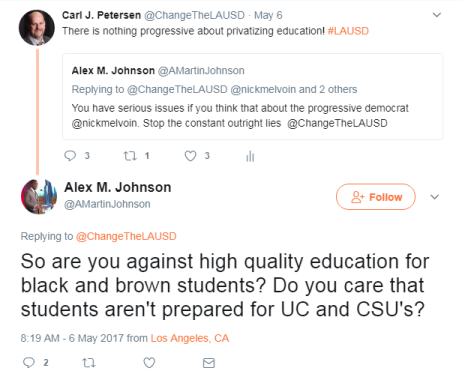 Perhaps the reason that charter proponents are forced to rely on desperate personal attacks is that the facts do not back up their assertion that charters help to improve opportunities for minority students. The NAACP report quotes a study that found 37% of charter schools “performed worse than their traditional public school counterparts serving similar students.” Another study “found that charter school enrollment explained less than one hundredth of 1% of the variation in students’ test  performance.” In comparison, Dr. Julian Vasquez Heilig, a Professor of Educational Leadership and Policy Studies at California State University, Sacramento, testified that “class size reduction [has] 400% more impact. Pre-K? 1000% more impact than charters.” This seems to suggest that those pushing for privatization of our schools over more proven methods of improving education outcomes have interests other than reducing the achievement gap.

Charters have also proven to be an unstable way of providing education as “approximately 211 charter schools closed across the United States” during the 2016-17 school year. “Since 2001, at least 2500 charter schools have closed”. “Black students are particularly susceptible to being impacted by school closures” as “45% of all students in charter schools that closed during those years were Black.” These leave parents scrambling to find new accommodations, students struggling to adjust to new surroundings and districts with the responsibility to integrate these students into their programs, sometimes without receiving any additional funding. 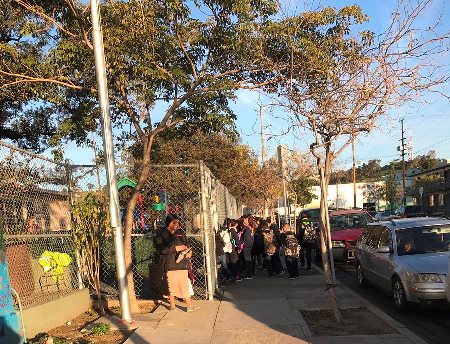 The NAACP’s report does not pretend that our public schools are not facing serious challenges and points out that “the achievement gap between children from high- and low-income families has grown in the last 50 years.” However, instead of turning our schools over to private operators, their task force recommends prioritizing the funding of our education system. It is hard to see how children are not being left behind when “in 36 states, public school funding has not yet returned to pre-2008 levels-before the great recession” or when “federal funds have also declined in real dollar terms for both Title I and for special education expenditures over the last decade.”

It should also be noted that with the exception of for-profit charters, the NAACP has not called for the elimination of charter schools. Instead, they insist on “a rigorous authorizing and renewal process for charters”. This includes allowing “only districts to serve as authorizers, [empowering] those districts to reject applications that do not meet standards, and [establishing] policies for serious and consistent oversight.” Enacting these regulations would help to ensure that these schools are providing equal access for all students and that they are contributing to the overall effort to eliminate the achievement gap.