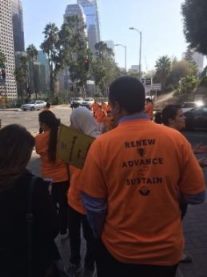 The outsized influence of the charter industry goes beyond the election cycle. Despite the fact that the majority of students enrolled within the LAUSD attend public schools, it is the charters that receive preferential treatment at Board meetings. Parents, teachers, and students are regularly bussed in (during school hours) in an attempt to sway the Board to ignore the various allegations against them. Unfortunately, no such organization exists to represent LAUSD public school students and so their voices are often left unheard. The number of charters continues to expand, without serving the needs of all students; fraud continues to go unpunished and the District forces public school students to give up needed space.

With an incoming School Board that is set to represent the minority of students enrolled in charters, public school students will need other representatives to ensure that their needs are met. The Northridge East Neighborhood Council (NENC), of which I am an elected member and serve as the Chairperson of the Education Committee, provides an example of the type of oversight that should exist. At the May meeting, with a unanimous vote, the Council passed the following resolution proposed by the Education Committee:

This resolution was the result of many months of discussions by the Education Committee about the effects of GHCHS, which bills itself as the largest charter in the country, on NAHS, which is located within the boundaries of the NENC. In reviewing the demographics of the two schools, it became clear that NAHS was shouldering a larger share of the responsibility for educating students with additional needs than the charter, only 1.7 miles up the road. This included those with special educational needs, English learners, homeless students and those receiving free and reduced-price lunch. Since resources are diverted to ensure that the additional needs of these students are met, the entire student body is affected. It is, therefore, imperative to compel GHCHS to do more to meet its obligation to serve all students in return for the public funding that it receives. It was the conclusion of the Education Committee that this must start by reviewing GHCHS’ enrollment policies.

While the Neighborhood Council system has the unique ability to oversee individual schools throughout the city, this is not enough. The District covers 720 square miles and needs an organization to help bring cohesiveness to the disparate needs of different student groups. By speaking with one voice, advocates for public education can start to counteract those who would disband our education system for their own benefit.