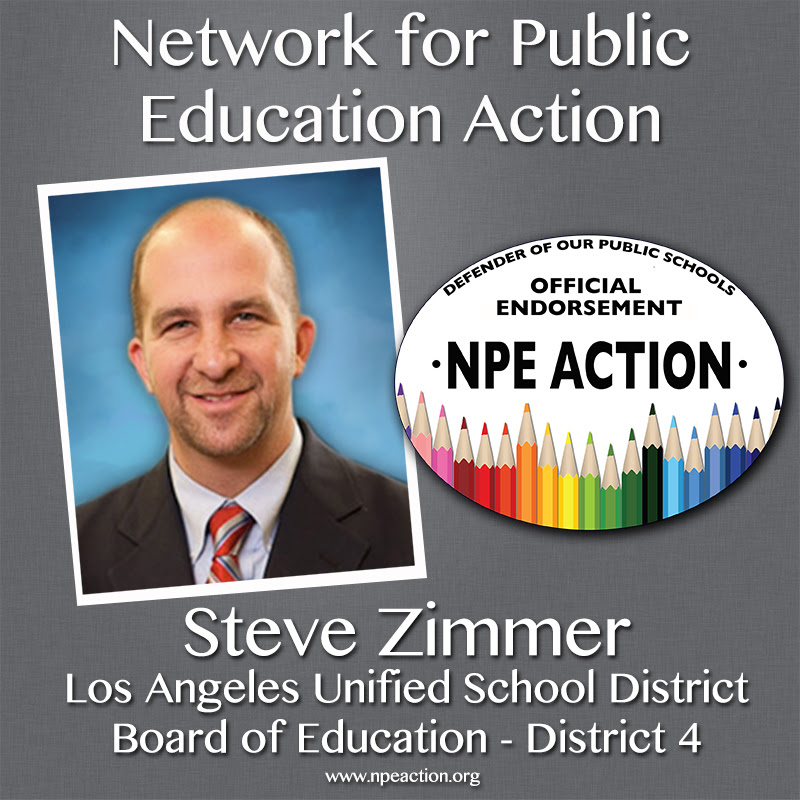 With financial backing by former Superintendent John Deasy, the election of Melvoin would also represent a giant step backward. Deasy was responsible for numerous scandals within the District, including the $1.3 billion iPad boondoggle and the MiSiS crisis. Under Deasy’s leadership, employee relations reached a low when he tolerated rampant bullying of teachers and other staff members. Allowing him any influence on the District would threaten to disrupt the relative calm that returned after his departure and would once again threaten the distribution of our children's education.

Zimmer is by no means the perfect candidate and Melvoin’s campaign has correctly pointed out that he bears some responsibility for not properly supervising Deasy. What they ignore is the fact that Zimmer himself has already taken personal responsibility for the iPad scandal stating that “never have I failed more.” As the Los Angeles Times has pointed out, “a number of others never did” take responsibility for their part in this massive boondoggle.  While accepting blame is a sign of a successful leader, Dick Riordan and Melvoin’s other supporters have tried to use it against Zimmer. What they conveniently forget is that Zimmer was the only Board member who did not vote to promote Deasy to the role of Superintendent. This oversight should not be surprising since Melvoin’s supporters spent $500,000 protecting Monica Garcia’s seat, even though she was the Board President during Zimmer’s tenure. Since they were willing to give Garcia a free pass, it is clear that their concern is not accountability but pushing their agenda of privatizing our public education system.

I do have a concern with Zimmer’s vote last year to continue litigation with the parents of children with special education needs who are fighting to keep the District’s special education centers open. However, the alternative is to let Melvoin pass Eli Broad’s plan “to reach 50 percent charter market share” in Los Angeles. Because the District has a history of allowing charters to cherry-pick students, this will result in a ghettoized District where charter executives are given oversized salaries and where more difficult-to-educate students, including those with special needs,  languish in underfunded public schools. The choice is clear that Zimmer is the better choice to defend students with special needs.

I have had the opportunity to hear Steve Zimmer speak on several occasions outside the confines of the LAUSD Board Room. In these environments, he is quite inspiring and makes it clear that he knows what has to be done to improve public education. Hopefully, in his final term on the Board, he can find that voice on the Board’s dais and become the leader that our students need.