The LAUSD's Failure of Leadership

"By failing to prepare you are preparing to fail." 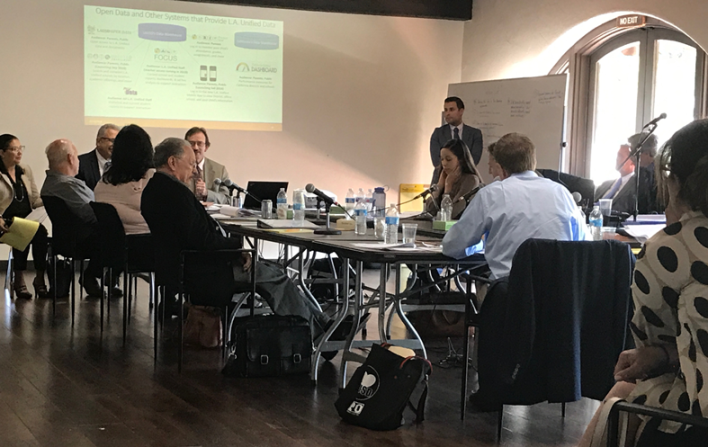 On Wednesday, August 15, the LAUSD School Board met for the first time since Ref Rodriguez resigned in disgrace on July 23, 2018. Neither a discussion about scheduling a special election to fill the seat nor Board Member Scott Schmerelson’s resolution to temporarily appoint Jackie Goldberg were included in the agenda. However, the public could make their voice heard as long as they could tie it to “any item that is described in [the public] notice” of the meeting.

Board President Monica Garcia did not make it easy for the public to speak. The “Order of Business” showed that public comment would be the third item of the meeting, right after the Roll Call of Members and Pledge of Allegiance, and specified that it was to be “on Items to be discussed at This Meeting”. However, Garcia opened the meeting by pushing the comment period until the end of the meeting that was scheduled to last three hours. Undeterred, I delivered the following statement:

There are some really weighty issues on this agenda, although it is a little ironic that District Transparency is put on the agenda and then the public comment is moved to make it as inconvenient as possible for the public. But, I digress.

There are some important subjects on this agenda but one-seventh of the District is not represented today. I’m not sure why. It is not like Ref Rodriguez died suddenly and we were caught flat-footed because it was a surprise.

Back on February 27, 2015, KPCC released the information that eventually led to his felony conviction. Yet this Board made him the President. That either says that you were willfully ignorant or you condoned what he did.

In any case, almost a year ago he was indicted and had to step down from the presidency. The current leadership then elected themselves to lead this District. Yet you had no plan as to what would happen if he resigned? It was certainly a possibility. Shouldn’t you have realized that you needed a plan?

Now one-seventh of the District is unrepresented. You have yet to hold a meeting in the three weeks since he resigned to discuss what you are going to do. Not until another week has gone to by without representation are you going to decide if you are going to hold a special election or appoint someone to the seat.

That is not going to work for the stakeholders of this District. Everyone deserves to have representation.

In conversations held outside of the meeting, Board Member Richard Vladovic made it clear that he is pushing for a special election and will not vote to appoint anyone to the seat. While this would ensure that the voters of Board District 5 have complete control over the selection process, it would leave them unrepresented for at least another six months. This further victimizes the stakeholders after their former representative took the seat by committing election fraud.

Dr. Vladovic’s position is consistent with the votes that he made after the untimely passing of Marguerite LaMotte in 2013, which is the last time that the LAUSD faced a vacancy on the Board. However,  he seems to ignore the change that was made to the city charter which now allows an appointment to be made until a special election can be held. Previously, the Board had to choose between a special election and an appointment.

On Tuesday, the Board will meet again and consider Scott Schmerelson’s resolution to appoint Jackie Goldberg to the seat on a temporary basis. One could argue that Bennett Kayser received the most untainted votes in the previous election and should belatedly be called the winner. Melvoin and Garcia have also stated that they “would like to ensure no break in representation for District 5 by appointing a temporary voting representative as soon as possible,” but have yet to put forward a candidate. In order to actually put “kids first”, the Board should make sure that this meeting does not end without making a decision so that all stakeholders in the District are represented.