As if to prove the point that the LAUSD is too geographically large, it took me a little over an hour to travel from Northridge to the meeting location at the Point Fermin Outdoor Education Center in San Pedro. That was without hitting any traffic. After passing some beautiful views of the ocean, Siri directed me to turn into an unmarked gate and past some abandoned buildings. While she said that I had reached my destination, the only clue to the location of the meeting was a small sign visible only to those traveling the other direction.

It was quickly clear that the District had succeeded in keeping the stakeholders at bay as the number of school police officers on duty outnumbered the  the people milling about. Scott Schmerelson had arrived early and was getting a tour of the facility. The other members slowly trickled in and greeted each others like students returning from summer vacation. Unlike regular Board meetings, this one started only ten minutes late. 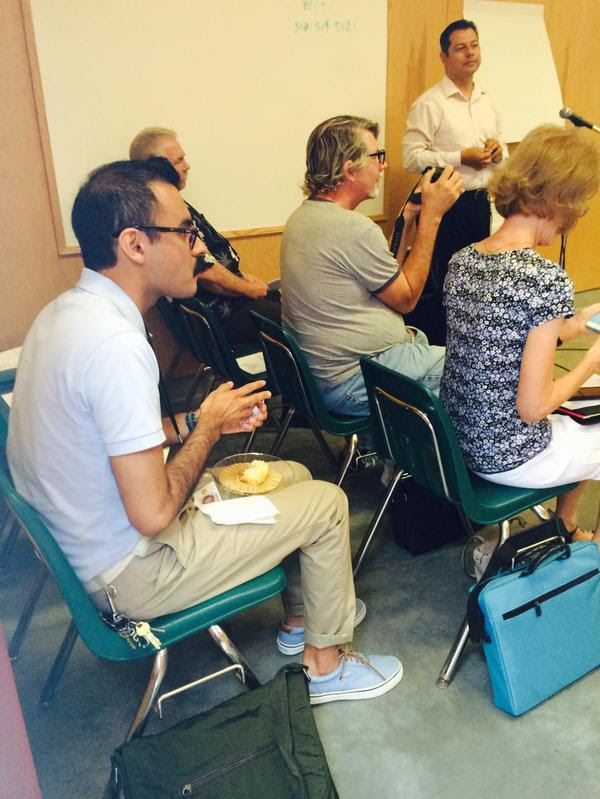 There was only a handful of seats placed for the public and these were not even filled. The “crowd” was comprised of one reporter (Mike Szymanski from the LA School Report), assorted LAUSD staff members, one other stakeholder and me. The meeting was called to order and we pledged our allegiance to a flag that we were told was in a general direction outside of the walls. The other stakeholder and I were given a chance to express our views and, without the usual distractions that occur at Beaudry meetings, I felt that I had the attention of the entire Board. Less than ten minutes after the start of the meeting, we all left the Board so they could continue in closed session to consider a $250,000 contract for a firm to conduct the search for a new Superintendent.

During my turn at the mike I expressed the view that the stakeholders deserve an open and transparent search for a new Superintendent. Unfortunately, the Board seems to be indicating that the public’s only input will come late into the process, perhaps only after the decision has already been made. By debating the search firm’s contract in closed session, they have excluded the public from having a say about the qualities the District is designating for the search firm. Choosing between supporting whatever candidate is presented to us or opposing the candidate and throwing a quarter of a million dollars out the window is no choice at all.

Since the decision to request bids was also done behind closed doors, the public also does not know why the Board feels that using 250,000 of our students’ education dollars to conduct a search is necessary. As the largest Board-run district in the country, it should be apparent to any interested candidates that we are looking for a Superintendent. We should let them apply, allow the staff to verify their qualifications, have a committee that includes the stakeholders interview them and then allow the Board to vote on the final recommendation. This would represent real input.