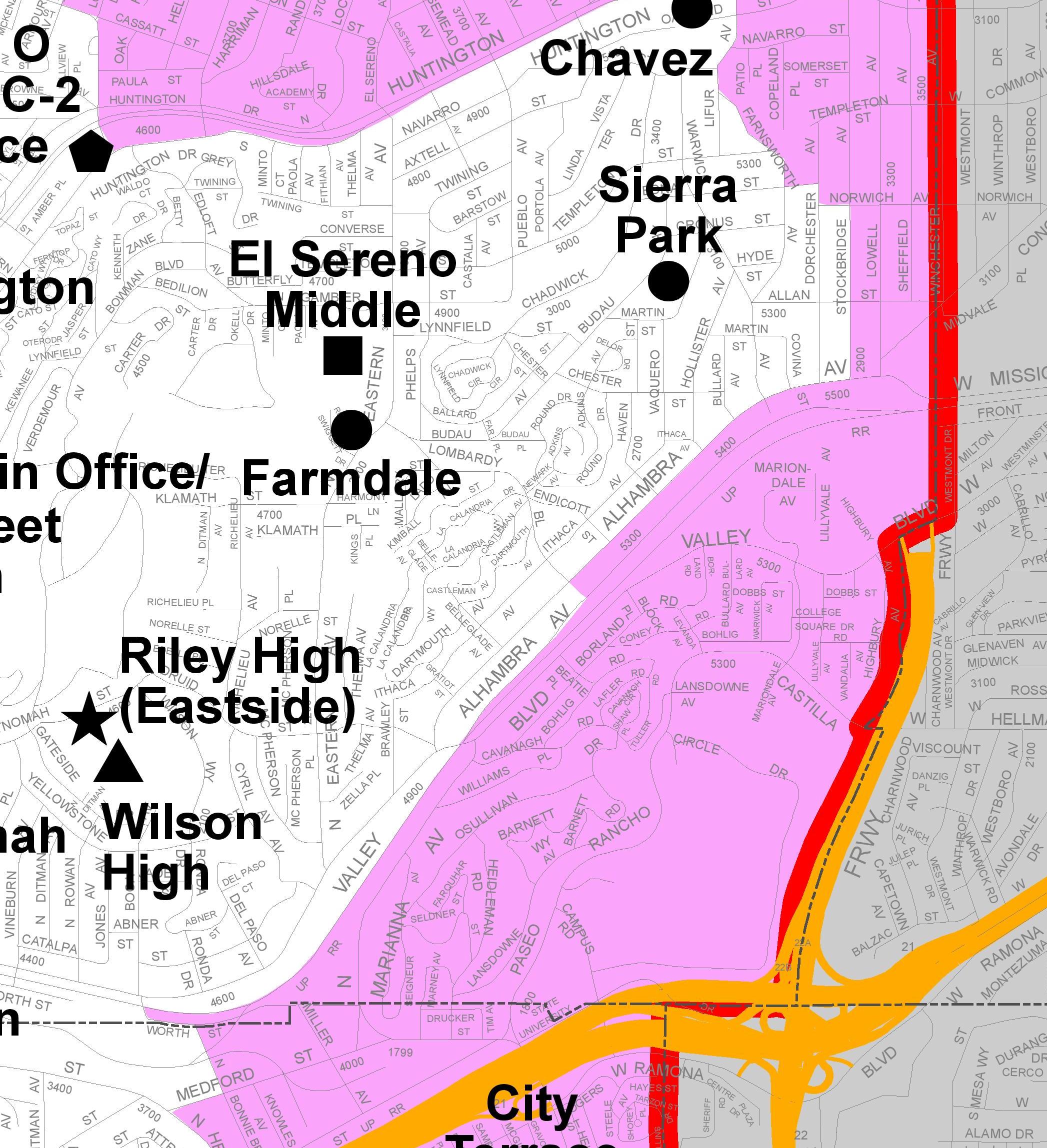 Gerrymander: “manipulate the boundaries of (an electoral constituency) so as to favor one party or class.”

If one wants to see a visual representation of “gerrymandered”, the map of LAUSD District 5 is a good place to start. In an effort to carve our Hunger Game like districts, the mapmakers at the Los Angeles City Council took two larger sections and connected them with a long, thin ribbon that is sandwiched between District 2 and the LAUSD boundary.  Unfortunately for the residents of this ribbon, this creative mapmaking can mean that they do not have a democratically elected representative for the schools that their children attend.

One particularly interesting portion of this ribbon narrows to just three blocks wide and appears to have been drawn specifically to avoid including any schools. Moving the line over by just a few blocks would have included two schools. Instead, all families in this area send their children across the border to schools in District 2. If they have a problem at their school, they can contact Monica Garcia’s office, but what motivation does she have to help them? If she fails to help she does not have to worry  about losing their vote. Meanwhile, the Board Member that they vote for does not have any direct control over the schools their children attend.

Of course, this is not the only example of how the LAUSD fails at being a representative democracy. Despite an obligation to educate all children regardless of citizenship status, parents who are not citizens cannot vote and are, therefore, not represented on the School Board. Citizenship has not always been required in order to vote in the United States. “During the colonial and Civil War eras, noncitizen voting was permitted in 40 states and federal territories at different times, but it contracted during World War I and ceased altogether by 1928.” Until New York City put its School Board under mayoral control, “immigrants with children in the city schools could vote in local school board elections, whether or not they were legal citizens of the United States.” These parents pay taxes and are affected by District actions; they should also have a say in the governance of the schools.

Students are also not fully represented on the LAUSD Board. While the Board should be given credit for adding a Student Board Member during the last term, this role is purely advisory and not chosen through an election. No other group has a more intimate knowledge of the results of the policy set by the Board, but they have no say in the makeup of that Board. Allowing them to vote in these elections would also have the benefit of establishing “a lifelong habit of voting” and having “a positive impact on voter turnout for people of all ages.” Brazil, “Austria, Nicaragua, Argentina, some states in Germany and a canton in Switzerland have all lowered their voting age to 16.”

Improving representation were just some of the types of reforms that I suggested in the LAUSD election process after the 2015 election. I hope that other candidates in both the LAUSD and City Council 2017 elections, including my competitors, will review these proposals and consider incorporating them into their own platforms. Feel free to take them, they were put forward to help the students of our District.