“Her current scandals and controversies will continue throughout her presidency and we will make it honestly, look, it's gonna be virtually impossible for her to govern. Now, the Republicans have talked very tough and the Democrats. It's gonna be just another mess for another four years, folks. A mess. We've got to get back to work, right? I mean, we have to get back to work.”

At no other time in history have we had access to so much information. Unfortunately, even with 24-hour news channels and the Internet, our news media provides us with very little depth. As an example, you probably heard plenty in the past week about trade wars, White House staffing turmoil and a possible summit with North Korea. But how many times did the talking heads and Internet pundits mention the following aspects of the stories:

Trump’s supporters like to give him credit for anything that is going well and either blame Obama for news that is less flattering or just dismiss the data as insignificant. The stock market provides a perfect example as it was considered a top accomplishment while soaring but now receives little attention. Could this be because at this same point in the Obama presidency it was performing better?

Another data point that has been ignored by Trump’s fans is the widening trade deficit under a presidency that was supposed to make America great again. In fact, January “was the fifth straight month of a rising deficit, reaching its highest level in more than nine years.” Exports decreased by 1.3% while imports remained steady. 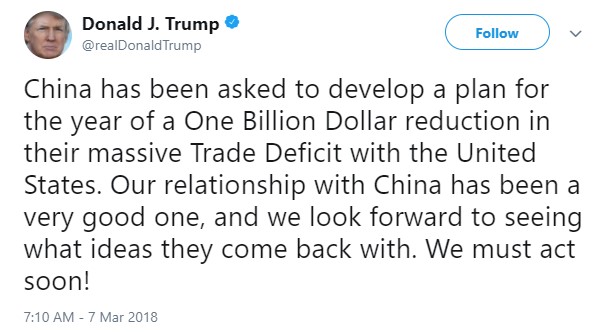 The first shots fired in Trump’s trade war will do little to solve the problem of unequal trade policies. China accounts for “half the overall trade gap” and in January “the monthly trade deficit in goods with China widened to its highest level since September 2015”. While “the combined tariff and tax rate for exports to the U.S. is 9 percent, on average”, goods exported to China face a tax-tariff total of 27 percent. Yet, Trump is focused on steel, of which China is not among the top ten suppliers to our country. Instead of taking direct action to ensure a more fair trading relationship with China, Trump has “asked to develop a plan for the year of a One Billion Dollar reduction in their massive Trade Deficit with the United States.” In other words, China gets the carrot while our friends and allies get the stick.

With the departure of Gary Cohn, much focus was given to the 43% of Trump’s top staffers who have left the White House (a record-breaking number), but little attention was paid to a remaining member’s violation of federal law. When Kellyanne Conway stood on the White House grounds in November and told Fox viewers not to be “fooled” by “Doug Jones in Alabama” and that “He will be a vote against tax cuts. He is weak on crime. Weak on borders. He is strong on raising your taxes. He is terrible for property owners”, she violated the Hatch Act which “bars federal employees from using their government positions to sway an election in favor of or against a particular candidate in any election.” As a result, Special Counsel Henry J. Kerner referred “her violations” to the White House for “consideration of appropriate disciplinary action.”

While “removal is the only penalty authorized for violation of the Hatch Act”, Conway remains in her position. In fact, the White House seems intent on ignoring the violation since the first official response was that she “did not advocate for or against the election of any particular candidate”. Not a surprising defense of the person who coined the term “alternative facts”.

Trump’s supporters are already calling for a Nobel Peace Prize because he has agreed to meet with the North Koreans. This seems to be a case of counting chickens before they hatch as the specifics of this meeting have not even been worked out.  In fact, the President is not always clear about which Korea he has spoken with.

At a speech at the Gridiron Club on March 3, Trump made the astounding announcement that North Korea had “called up a couple of days ago and said, ‘We would like to talk.’” According to the President, he personally responded that “So would we, but you have to denuke.” However, according to an official of the National Security Council, “President Trump did not have a call with the North Koreans.” Instead, he had had a “phone call with South Korean President Moon Jae-in.”

It will be an amazing achievement if the Dotard and the Rocket Man are able to turn their Kindergarten Diplomacy into a peace treaty. If it happens, let’s hope that it is signed with the correct countries.

When protesters used their First Amendment rights to counter right-wing speakers at Berkeley last year, Trump supporters accused them of violating their rights. The media and establishment Democrats played into this narrative and condemned ANTIFA for the violence.Unfortunately, these same mainstream media outlets were silent when evidence was presented about who is really responsible for the violence. With the exception of a local news outlet, a Google search presented no coverage of threat made on video to burn down Revolution Books in Berkeley. Even worse, there were no reports of arrests in the case. In Trump’s America, these actions are just “fine”.