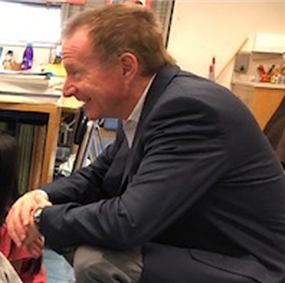 “It has been a great and very profitable partnership with David Pecker and the team at AMI over the last four years and we look forward to the next phase of growth.”

At best, the National Enquirer, published by AMI, is mindless entertainment for people stuck waiting in line at their local supermarket. While stories about aliens and other ridiculous conspiracy theories are harmless, their coverage about celebrities crosses a darker line. Intruding into a person’s private life during times of adversity to sell copies of a tabloid is bad enough when the stories are real. Churning out works of fiction using a real person as the main character shows a lack of any moral center.

This is the type of business that Austin Beutner invested in as the founder and president of Evercore Partners. After a recapitalization Evercore became the controlling shareholder of AMI. He saw a business with a raw material of human pain and focused on the possible financial gain. As parents, is the message “profit above all else” something we would like to teach our children? It is an important question to ask given the fact that Beutner is currently the Superintendent of the Los Angeles Unified School District (LAUSD), the second largest school district in the country.

“If in my position I can’t stand up to this kind of extortion, how many people can?”

As exposed during the 2016 election cycle, it has been clear that the media empire that Beutner helped grow also had a political mission. “Federal investigators and legitimate media have...suspected and proved that [Chairman and CEO] Mr. Pecker has used the Enquirer and AMI for political reasons.” Allegedly, AMI and Trump operatives “communicated about Trump rivals such as Ben Carson, Carly Fiorina, and other Republican primary candidates”. Most notably, the Enquirer ran stories linking Ted Cruz’ father to the assassination of JFK. During the general election, insiders say that a “cover story was sent to [Michael] Cohen in advance” that “purported to disclose [Hillary Clinton’s] secret medical file.” Last week, Jeff Bezos released emails that show AMI attempting to influence political coverage in the Washington Post through the use of blackmail.

On the other side of the political equation, Pecker has used his media empire to protect Trump from stories that could be politically damaging. Most notably, one month before the last presidential election, Trump’s attorney “arranged for AMI to pay Playboy Playmate Karen McDougal $150,000 for exclusive rights to her account of having an affair with Trump”. Like other stories they allegedly collected about Trump, AMI buried this exclusive in a vault rather than putting it on their front page.

While avoiding the potential illegalities of AMI’s methods, Beutner did seem to learn some lessons about controlling the media in order to advance a political agenda. As publisher of the Los Angeles Times, Beutner announced a project that would be funded by outside organizations to “provide an ongoing, wide-ranging report card on K-12 education in Los Angeles, California and the nation.” What he did not disclose was that the funders were all proponents of privatizing public education or that one of them, Eli Broad, was in the process of implementing a plan to have half of all students in the LAUSD attend charter schools. “In other words, the Times’...education-reporting project [was] being funded by some of the very organizations the new education-reporting project [would] be covering.”

Our country’s democracy depends on the checks and balances provided by an independent media. Crony Capitalists like Pecker and Beutner jeopardize this coverage by using their power and money to weaponize the media to suit their own personal interests. The result is coverage that allows Trump to get away with actions that would never have been tolerated by past presidents. Locally, it allows charter schools to escape accountability by suppressing coverage of misdeeds. This is the Fake News that we should actually be concerned about.