Have the Bullies Met Their Match?

Too often, a teacher in the LAUSD’s Teacher Jail system is doomed to a career ending sentence if they cannot generate the publicity that will force the district’s hand. When district bullies removed Greg Schiller from the classroom because of a science project that they did not understand, students protested and the media noticed. Schiller’s suspension was ended after two months, but not before the fencing team he coached was forced to cancel their participation in a competition and AP students were deprived of study time. After leading class trips to France and the White House, choir teacher Iris Stevenson was placed in Teacher Jail. “Parents, students and community members rallied” and she was released back to the classroom, but only after students missed her instruction for an entire semester. Stuart Lutz was returned to the classroom with his only discipline being a “‘conference memo’, in which an administrator explained what Lutz did incorrectly and how to avoid such problems in the future.” Lutz was also the beneficiary of pressure on the district, including an online petition,  from people who did not believe that improprieties in field trip paperwork and fundraisers are adequate reasons to remove an art teacher from the classroom for eight months.

Until last month it appeared that Rafe Esquith was headed down the same path. After being placed in teacher jail in March for “telling a joke about nudity in Mark Twain’s ‘The Adventures of Huckleberry Finn,’” publicity was building about this teacher’s stay in purgatory. Several media outlets were covering the story and a well-attended protest was held before the School Board. He had also secured the services of a high powered law firm who “told the district to publicly apologize and let him return to work or be sued.” 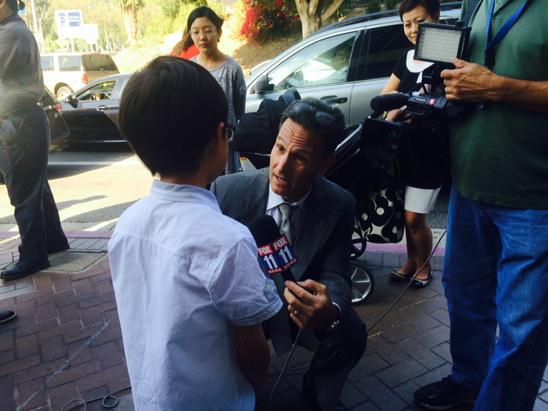 If there is anything that bullies like less, it is for their victim to stand up to them. They reacted to Esquith’s lawyer's ultimatum by proceeding to attack the character of a teacher “who has worked 12-hour days for several decades, usually keeping his classroom open during summer, holidays and on some weekends.” While the LAUSD hid behind “privacy laws” to avoid saying why they kept Stevenson out of her classroom, they responded to outside pressure in Esquith’s case by stating their investigation “has broadened to include an accusation that he abused a child 40 years ago.” The LAUSD “first learned of the allegation in 2006 and reported them to the Los Angeles Police Department. No charges were filed at the time.” If the district now believes that these allegations have merit, they need to explain why this teacher was not removed from the classroom nine years ago and those responsible for the inaction need to be fired.

To some extent, the district’s strategy worked as coverage of Esquith’s plight disappeared. After all, who wants to be caught defending a potential child abuser? However, his attorney, Mark Geragos, was unswayed by what he described as “an attempt to smear the teacher.” His firm continues to collect evidence from affected teachers and “has noticed a pattern of allegations against teachers who are older than 50 and are usually in higher-end pay scales.” The LAUSD has been notified by the firm that they intend to file a class action lawsuit. Finally, the teachers who have been bypassed by the publicity machine will get their day in court.

Despite the fact that they already employ an entire department of lawyers, the district has now employed an outside law firm to do their dirty work. These are the type of firms that once argued that a middle schooler can consent to sex with a teacher. Their current firm is looking into The Hobart Shakespeareans, a non-profit run by Esquith that is independent of the LAUSD. It was not enough that the District's actions caused the program to cancel this year’s student performances and a trip to a Shakespeare festival in Oregon, parents are now complaining about the “harassing conduct their students experienced at the hands of the LAUSD investigators.” I thought that the district was supposed to be serving these kids...