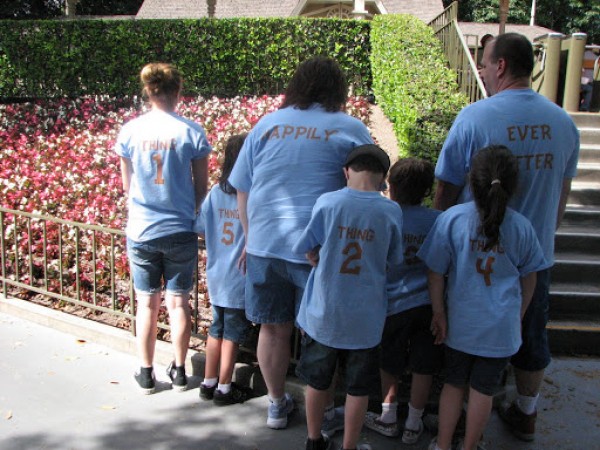 Once upon a time,

A man and a woman met,

And soon after they fell in love.

Prior to our meeting, Nicole had never brought her kids to Disneyland. Upon learning this fact on our first date, I joked that this was a type of child abuse. However, in reality, I understood that it was a challenge to take a set of triplets out of the house, never mind to a crowd-filled theme park. Add the fact that two of the girls were on the autism spectrum to the mix and a place designed to stimulate the senses did not seem like the safest bet for a successful outing.

Ironically their first visit had already been planned and took place shortly after we met. Nicole braved the park with an army of support. The fact that I was not there can be verified by the holiday card picture that commemorated the event. Children wearing leashes would have never occurred on my watch.

As our families began to blend together, it was not long before it was time for a joint trip to the park. Annual passes were purchased and these trips became regular occurrences. Memories were being laid for yet another incarnation of the family unit.

My favorite early memory was an attempted visit to It’s Tough to be a Bug. My teenage daughter always refused to see the show and immediately took her place at the exit. One of the girls with autism had an issue with the enclosed space and had to be taken out before the movie even started. Her sister was the next to be escorted out as she was unable to handle the 3D aspect of the show. The remaining triplet left in tears as the action was taken over by the bad guys. That left my son, who thought it was ridiculous to be the only person left from the family and joined everyone else at the exit.

But unlike most tales of love, that wasn't enough.

For today is not about two people, but 7 dwarfs coming together as one family.

Becca, Jessie, Sydney, Morgan, Zoey: you are important members of this ceremony and the magic we are creating today.

Without things 1 through 5, this would not be an e-ticket ride.

This episode turned out to be the exception as it turned out that autism was not usually a barrier to the park. There were challenges, but for the most part, it was a place where the children thrived. The child with limited speech abilities would drag me from ride to ride and tell me “castle” when I dawdled too long on Main Street on the way into the park. The other would drive the rest of us crazy with her repeated request of “Wanna go to Disneyland?” during the week.

The park was also a place where I got to watch my older kids grow into their role as siblings in a larger family. My son, who was now suddenly not the youngest child, had to be coaxed away from being the Mother Hen; Disneyland is a place to explore, not to be herded. My daughter displayed patience that she had not always had for her brother as she coaxed her new siblings through their fears and emotional difficulties.

Now Carl repeat after me:

I, Carl, take you Nicole, to be my wife,

My partner in life and my one true love,

I will be yours in times of sorrow and times of joy,

In times of sickness and times of health,

In times of failure and times of triumph.

Carl, do you promise to cherish and respect her,

To laugh at her and cry with her,

To communicate your feelings and needs with her,

To comfort and encourage her,

For as long as you both shall live?

Once it was apparent that my divorce was going to become final, Nicole and I started to kick around wedding plans. Given the role Disneyland has played in our family, it seemed like the obvious place, but it was also out of our budget. Then we started thinking outside the box.

Corporate Disney does not like people not using their services, so we had to work completely under their radar. Instead of formal wedding attire, we arrived at the park in t-shirts emblazoned with the dwarf who most closely resembled our individual personalities. We decided that Tom Sawyer Island was the most inconspicuous place in the park and had the added benefit that additional security could not easily reach us at this location. We assembled on the island with our closest friends and relatives, waited for security to pass (they were busy making sure that adoring pre-teen girls did not overwhelm Jack Sparrow) and exchanged our vows.

Now Carl, place the ring on Nicole's finger and repeat after me:

Let this ring be a symbol of my promises to you and your children.

I am honored to call you my wife.

I now proclaim you husband and wife.

Carl you may kiss your wife.

It is my honor to announce Mr. and Mrs. Petersen.

It has been five years since we created the most life-changing of my Disney memories. Unfortunately, we have been priced out of the Annual Passes that used to fuel our visits to the park and we have not been back for a while. When passing by in the car, my daughter will still ask “wanna go to Disneyland.” I then know that there are still memories yet to be created.

Credit to T. J. Ferreira for the awesome wedding vows that I live by every day.