On Deaf Ears: My Public Comment to the LAUSD Board

On September 12, 2017, the LAUSD School Board was set to take a vote to approve several charters for five-year renewals, including ICEF Innovation. However, before doing so they needed to hear public comment. The following are my remarks before the Board:

I guess that we could have a debate about whether it is great to be experimenting with children, to begin with, but that is the law. However, part of experimenting is we have to recognize when the experiment has failed. When the California Charter School Association itself gives a statewide ranking of the school a three out of ten, in my book that is a fail. How can we continue with the same process? It failed, so why not stop it?

The Charter School Division listed the school’s Student Achievement and Educational Performance as a two out of four. I heard continuously during the campaign from Nick Melvoin’s supporters complaints about the District passing students who had earned D’s. This is much lower than a D, what are we doing?

When the Charter School Division asked what the school was going to do about the suspension rate they stated that “elements of restorative justice practice” would be added, “teaching, modeling, and communicating appropriate behavior to all students in the school”. But there is nothing in there to deal with the higher percentage of Special Education students who are getting suspended. The school needs a plan to specifically deal with these children. Do they have enough behavioral support? Is there a plan for them?

When looking further at the school’s website, this is not really surprising. As I showed you in the package that I gave to you, under special education on the school’s Website it says “coming soon!” That is not a plan. This is a school that is up and operating. That should be there from day one, not when we are looking at a renewal. 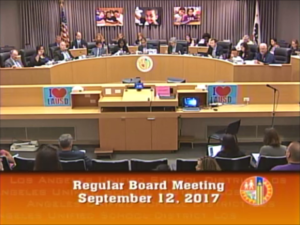 Not surprisingly, the Board that was elected with millions of dollars in support from the Charter industry renewed the charter by acclamation. Not one Board Member would stand up for the students being educated in a failing program. Going further, Board Member Monica Garcia even flashed a thumbs up to the school’s supporters as they left the Board Room. Someone better have a plumber on standby - it is not going to be long before the public’s money that is being flushed down the toilet will start to clog up the pipes.